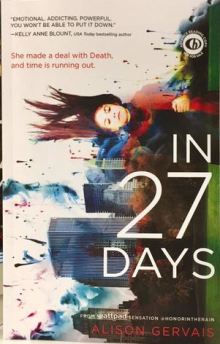 Age range: YA, approximately 11 up.

Hadley Jamison is shocked when she hears that her classmate, Archer Morales, has committed suicide. She didn’t know the quiet, reserved guy very well, but that doesn’t stop her from feeling there was something she could have done to help him. Hoping to find some sense of closure, Hadley attends Archer’s funeral. There, Hadley is approached by a man who calls himself Death and offers her a deal. If Hadley accepts, she will be sent back 27 days in time to prevent Archer from killing himself. But when Hadley agrees to Death’s terms and goes back to right the past, she quickly learns her mission is harder than she ever could have known.

Hadley soon discovers Archer’s reasons for being alone, and Archer realizes that having someone to confide in isn’t as bad as he’d always thought. But when a series of dangerous accidents starts pushing them apart, Hadley must decide whether she is ready to risk everything—including her life—to keep Archer safe.

From award-winning Wattpad author Alison Gervais (HonorInTheRain) comes In 27 Days, a story of redemption, first love, and the strength it takes to change the future.

There was something off. I couldn’t put my finger on what exactly it was, but it was definitely there.

Yes, something was out of balance, I decided as I stepped off the bus and onto the sidewalk outside John  F. Kennedy Prep. The place looked like it did almost every other day, with its red bricks, bright-colored banners strung up everywhere, and the jumble of students lingering around outside the front doors. Nothing as ever out of the ordinary.

Yet the gray clouds rolling in across the sky felt smothering, bringing with them a feeling of suspicion…and sadness. An almost suffocating sadness. New York was the city that never slept, the place that had a thousand different attitudes. But I’d never felt one like this before.

This was originally on Wattpad (platform for original fiction, similar to fanfiction for those writing in a particular fandom) and had a massive following. I received an e-ARC from NetGalley in return for honest feedback. All quotes are from this proof, so there may be minor differences to the printed version.

The story started off slow, introducing the setting and the characters. At first I was wondering why so many readers had found this compelling reading.

However, with the introduction of Death, everything kicked up a notch.  I couldn’t read quickly enough as I was so desperate to find out what would happen to the characters. It is the characters that give this story its strength. They are realistic, strong, relatable and flawed. I liked how the Chapter headings count down the days until Archer takes his own life and I could feel Hadley’s desperation as she tried to avert this outcome.

The relationship each teen has with their family is discussed – unlike some YA books where the parents are completely absent, ineffectual or downright harmful. I particularly loved all the characters in Archer’s family and could relate to the feeling of never being able to keep a secret because everyone knows everyone else’s business.

One of my least favourite things in books is insta-love where characters are suddenly infatuated with one another, despite having done none of the build-up to an actual relationship. In some ways, this obsessive behaviour can be portrayed as romantic, when in real-life it could be seriously problematic. Imagine my relief in this book when Archer and Hadley’s relationship is built up gradually and steadily, suffering setbacks and misunderstandings which eventually make their relationship stronger and more realistic.

While I have not read the original story on Wattpad, this seems to be a longer, more fleshed-out version and is a strong debut. I will be looking out for more from this author!

Another wide, eerie smirk curled the man’s mouth as he took another drag on his cigarette. He shrugged a shoulder. “I’m know by a lot of names, actually. The Grim Reaper. The angel Azrael. Mephistopheles. But I suppose for simplicity’s sake, you can just call me Death.”

What I liked: The fast pacing, the character of Death, the family relationships, the gradual relationship between Archer and Hadley, the sensitive handling of a variety of issues, the importance given to each character’s feelings.

Even better if: Initially wondered why it had to be a romance, but the relationship was done well without any insta-love! Apparently there is a sequel so that fixes one suggestion for what could be better – will be reading that next.

How you could use it in your classroom: It would be an interesting discussion-starter for a number of issues you might touch on with teenagers during PSHE – depression and suicide, dealing with peer pressure, post-traumatic stress, etc. It could also be used to think about the impact of our actions on others – Hadley a difference to Archer’s decisions and therefore had a big effect on his family and her own.

(Thank you to Netgalley and Blink for my free review copy)