Once Upon a Northern Night

In this exquisite lullaby, the beauty and wonder of a northern winter night unfold, with images of a soft snowfall, the wild animals that appear in the garden, the twinkling stars, the gentle rhythm of the northern lights and the etchings of frost on the window pane.
As the young child sleeps, wrapped in a downy blanket, a snowflake falls, and then another and another. The poem describes the forest of snow-covered pines, where a deer and fawn nibble a frozen apple, and a great gray owl swoops down with its feathers trailing through the snow. Two snowshoe hares scamper and play under the watchful eyes of a little fox, and a tiny mouse scurries in search of a midnight feast. When the snow clouds disappear, stars light up the sky, followed by the mystical shimmering of northern lights – all framed by the frost on the window.
Jean E. Pendziwol’s lyrical poem reflects a deep appreciation of the magic of a northern winter night where, even as a child slumbers, the world outside does not rest but continues its own natural rhythms.
Isabelle Arsenault’s spare, beautifully rendered illustrations, with their subtle but striking use of color, make us feel that we too are experiencing the enchantment of that northern night. They simultaneously evoke winter’s nighttime life and the cozy warmth and security of a beloved child’s sleep. 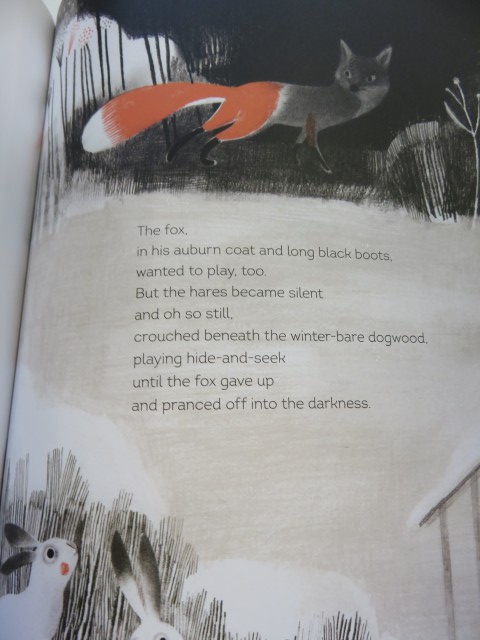 Once upon a northern night,

in the darkest hours,

the snowy clouds crept away

hanging in the purple sky.

I knew by the time you woke,

the sun would have chased them away,

on the branches of the willow.

Found this in my local library when back visiting my parents in Ireland (technically the library is no longer so local as the two libraries closest to me have now closed down…but this one is the closest to us now so we go as a family once or twice a week!). I initially picked it up as I was drawn in by the illustration-style on the cover and I am so happy that I did. The language is lyrical and poetic, drawing you seamlessly into a cold, snowy winter night. The illustrations perfectly accompany and add to the text – this book has become a new favourite and I plan to buy several copies to share around!

Once upon a northern night

sang across the sky.

I tried to capture them but they were much too nimble,

and only their rhythm reached you,

What I liked: Lyrical language, beautiful illustrations, a book that can be read and enjoyed many times, each time taking you away and into a magical winter wonderland.

Even better if: There was already a copy on my shelf…for now, it’s on the wishlist and on my mental list of books to include in a Book Advent calendar!

How you could use it in your classroom: Read it with your class on a cold, snowy day. Read it when introducing poetry or winter themes. Read it ad discuss the beautiful illustrations and how they complement the language used. Whatever you do ot however you use it, please do share this with your class!

(Thank you to my local library in Ireland for having this in stock!)