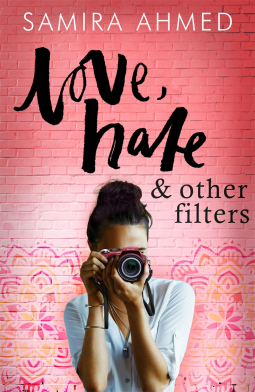 Love, Hate and Other Filters

A searing #OwnVoices coming-of-age debut in which an Indian-American Muslim teen confronts Islamophobia and a reality she can neither explain nor escape–perfect for fans of Angie Thomas, Jacqueline Woodson, and Adam Silvera.

American-born seventeen-year-old Maya Aziz is torn between worlds. There’s the proper one her parents expect for their good Indian daughter: attending a college close to their suburban Chicago home, and being paired off with an older Muslim boy her mom deems “suitable.” And then there is the world of her dreams: going to film school and living in New York City—and maybe (just maybe) pursuing a boy she’s known from afar since grade school, a boy who’s finally falling into her orbit at school.

There’s also the real world, beyond Maya’s control. In the aftermath of a horrific crime perpetrated hundreds of miles away, her life is turned upside down. The community she’s known since birth becomes unrecognizable; neighbors and classmates alike are consumed with fear, bigotry, and hatred. Ultimately, Maya must find the strength within to determine where she truly belongs.

There’s a shooter. No, it’s a suicide bomber. A plane is missing. There are dozens of victims. Wrong. Hundreds are dead. It’s a truck bomb. It’s poison gas. The building was leveled. The National Guard is being called up.The army has been deployed. The president has moved to an undisclosed location. All schools and government buildings are on lockdown. No one is allowed in or out. Parents are at the school doors demanding to get their kids. Police are stationed at the entrances of the high school.

There’s a steady flow of news and innuendo, and it’s hard to discern the truth. I’m frozen. My fingers curl tightly around my phone. The entire room is in chaos, but I see the action as if through the blades of a whirring fan. Disjointed and surreal. My stomach lurches. A terrorist attack. Another tragedy. Is there no end? Is this how life will always be?

I want to know more, but there is one piece of information I absolutely hope I don’t hear. I whisper a prayer to the universe. “Please, please let everyone be okay. Please don’t let it be a Muslim.” I know I’m not the only one hoping for this. I know millions of American Muslims— both religious and secular— are echoing these very same words at this very same moment. I know I’m not a very good Muslim, but I hope my prayers are heard. Prayers for the dead and wounded. Prayers for ourselves. Prayers for peace, hoping that no more lives are lost to hate.

I’m scared. I’m not just scared that somehow I’ll be next; it’s a quieter fear and more insidious. I’m scared of the next Muslim ban . I’m scared of my dad getting pulled into Secondary Security Screening at the airport for “random” questioning. I’m scared for the hijabi girls I know getting their scarves pulled off while they’re walking down a sidewalk—or worse.

I’m scared of being the object of fear and loathing and suspicion again. Always.

I wanted to read this as soon as I heard of it – I am always looking for more diverse books, especially ‘own voice’ books as I believe one of the most important things we can do is widen our own worldview by looking at it from another perspective. In many ways, fiction can do this much more effectively and emotionally than news reports or textbooks although those also play a role in learning about the world.

I thought Maya was a very realistic character and I liked how she spoke passionately about her dream and took steps to make it a reality. I especially liked the character of her aunt as she seemed independent and happy, even without a man in her life (I would like this kind of character regardless of religion or nationality, but it is even more important to have positive representations of Asian women as they are sometimes lacking in popular media). Unfortunately, a lot of her film references were lost on me as I have seen embarrassingly-few movies, but I plan to check out a few mentioned in the book now!

The other characters were also interesting though would have liked to see her mum as more fleshed-out than that standard stereotype of a mum pushing her daughter to be the perfect wife. I also loved the description of the oasis of peace where Maya can withdraw and be herself, and found her dilemma over following her dream versus keeping her family happy interesting to read. Her camera forms a barrier, a shield , a mirror and a filter through which she frames her experiences. Maya’s challenges facing the stereotypes of those around her after a supposed terrorist attack also make for heart-rending reading.

Over and over on the news, it’s the same image: the massive neoclassical building that used to take up an entire city block. One-third of it has been sheared off by the strength of the bomb. It looks like a giant meteor crashed through the roof, obliterating stone into dust. Bent steel beams and the pulpy ends of impossibly twisted floors are all that remain.

I sit on the edge of the sofa, my fingers digging into the fabric. Waves of nausea prevent me from eating anything but saltines and ginger ale.

Death is everywhere. And the pit in my stomach grows and grows. The ten o’clock nightly news confirms my quiet worry. The FBI holds a press conference at the site, corroborating hearsay that a passport found at the crater belonged to Kamal Aziz, an Egyptian national. They believe he is the suicide bomber.

It’s selfish and horrible, but in this terrible moment, all I want is to be a plain old American teenager. Who can simply mourn without fear.Who doesn’t share last names with a suicide bomber. Who goes to dances and can talk to her parents about anything and can walk around without always being anxious. And who isn’t a presumed terrorist first and an American second.

What I liked: This is such an important and timely book – we need more ‘own voices’ in publishing and we need to encourage everyone to read more widely to appreciate the world from other points of view.

Even better if: I would have liked to hear more from the main character about her faith and how her religion had an impact on her daily life – I feel like we heard a lot about her culture and what it is like to be a second-generation immigrant with parents who still have expectations from their home country, but not so much about Islam.

How you could use it in your classroom: Buy a few copies for your class library, pass a few out to readers who might enjoy it or, even more importantly, to those who might not enjoy it but need to read it to widen their worldview.

(Thank you to Netgalley and Hotkey Books for my e-ARC)

While you’re here, why not check out my reviews of Sunflowers in February, Robin and The White Rabbit, Feather or The Dream Dragon?