How are your bookshelves looking after adding your Christmas book haul? 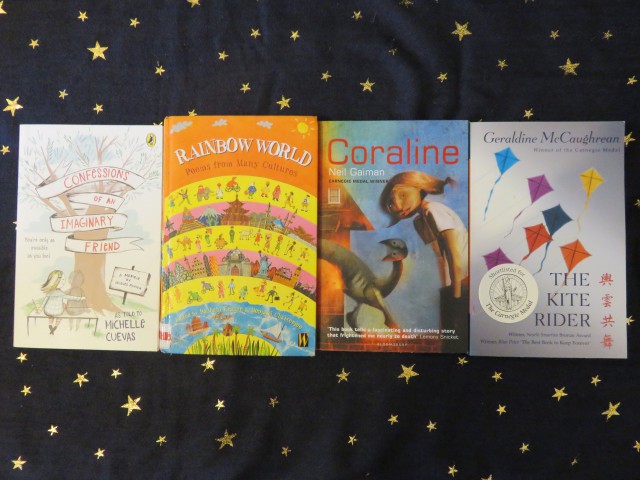 Confessions of an Imaginary Friend by Michelle Cuevas

Jaques Papier has the sneaking suspicion that everyone except his sister Fleur hates him. Teachers ignore him when his hand is raised in class, he is never chosen for sports teams, and his parents often need to be reminded to set a place for him at the dinner table. But he is shocked when he finally learns the truth: He is Fleur’s imaginary friend! When he convinces Fleur to set him free, he begins a surprising and touching, and always funny quest to find himself–to figure out who Jacques Papier truly is, and where he belongs.

Readers will fall in love with Jacque’s sweet, quirky voice as he gives them a look at life from an incredible new perspective

This was a gift from one of my pupils at the end of the last academic year. I am always happy to receive books as I hope that means that the fact that I love reading has got through to the children I teach. If they leave my classroom believing that reading is important and enjoyable, then I am a happy teacher. While I have yet to read this, it definitely  sounds like something I would enjoy.

Rainbow World: Poems from Many Cultures by Bashabi Fraser and Debjani Chatterjee

An authoritative collection of poems from other cultures for the 21st century. Poets included range from Valerie Bloom, Jackie Kay, Benjamin Zephaniah, Lemn Sissay, Meiling Jin, Tao Lang Pee and Bekleen Leong to Rabrindranath Tagore, Monica Alvi and Chuang Tzu. Comprising over 100 contributions there is a balance of poets in ethnicity and gender, and of poems in content, form and style. Themes covered include: Food, festivals and festivities; Race, culture and identity; Families and friends; Language and nonsense; The animal world; Nature and environment; School and play; and Mystery, myth and magic.

This was in my classroom library when I inherited the classroom and is a wonderful collection which I have dipped into numerous times whilst reading aloud to the children. Definitely recommended for any primary classroom! 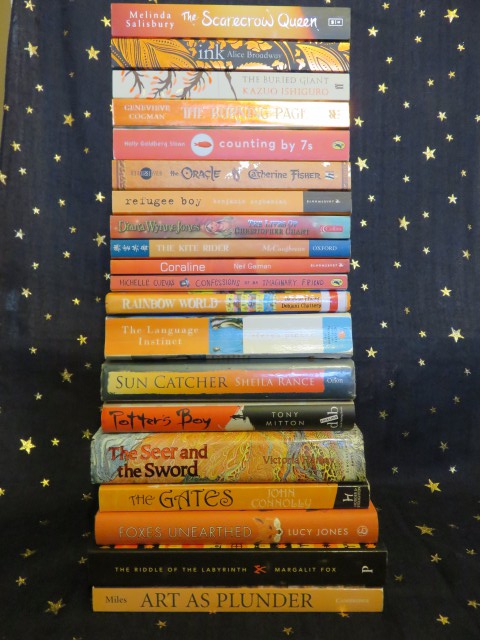 The day after they moved in, Coraline went exploring….

In Coraline’s family’s new flat are twenty-one windows and fourteen doors. Thirteen of the doors open and close.

The fourteenth is locked, and on the other side is only a brick wall, until the day Coraline unlocks the door to find a passage to another flat in another house just like her own.

At first, things seem marvellous in the other flat. The food is better. The toy box is filled with wind-up angels that flutter around the bedroom, books whose pictures writhe and crawl and shimmer, little dinosaur skulls that chatter their teeth. But there’s another mother, and another father, and they want Coraline to stay with them and be their little girl. They want to change her and never let her go.

Other children are trapped there as well, lost souls behind the mirrors. Coraline is their only hope of rescue. She will have to fight with all her wits and all the tools she can find if she is to save the lost children, her ordinary life, and herself.

Critically acclaimed and award-winning author Neil Gaiman will delight readers with his first novel for all ages.

This book probably needs no introduction – and it is well worth the hype! I have seen this used in a number of classrooms although I wouldn’t recommend it until Upper KS2 as there are some genuinely creepy moments in this.

The Kite Rider by Geraldine McCaughrean

Up and up the wind drew him.Haoyou looked about him and saw the wholeworld beneath him. And it was his. He couldbreathe! Today Haoyou was a kite, awindhover riding on spread wings.The great Miao master of the Jade Circus, offers twelve-year-old Haoyou the amazing chance to change his life — to escape from his family’s poverty and the pain of his father’s recent death — by becoming a kite rider!

Strapped onto a beautiful scarlet — and-gold kite, Haoyou is sent into the sky to soar perilously among the clouds and entertain the awestruck crowds below. Traveling the Empire as part of the Jade Circus, Haoyou earns freedom, money, and unexpected fame — as he skillfully performs for local villagers who believe he can bring back messages from lost loved ones whose spirits haunt the sky. Miao even plans for Haoyou to perform before the Mongol conqueror Kublai Khan himself!

But what about the duties that bind Haoyou to the ground — his duties to his family, especially to his widowed mother? And is the Great Miao all that he seems, or could he be using Haoyou in a treacherous plot?

From incredibly versatile Carnegie Medalist Geraldine McCaughrean, author of The Stones Are Hatching, comes this dazzling story of adventure, betrayal, family, and sacrifice set in the dramatic, dangerous world of thirteenth-century China.

I have read this a few times over the years – as a child and as a teacher. I am always interested to find books which spark an interest in other countries and cultures so this is a good book to start that discussion with your class.

How do you organise your bookshelves – by colour, author, genre, etc?

Have you read any of the books on this pile? Any favourites or books to avoid?