Four of the six bookshelves have been delivered and assembled by yours truly – they really were very straightforward even for a beginner like me. The problem we now have is attaching them to the wall so they don’t topple.

We live in an apartment at the op of an old Victorian house and the walls either seem to be like concrete, completely impermeable to nails, drills, sledgehammers etc or plaster that seems ready to crumble away if you breathe on it…all of this makes drilling holes for the brackets…shall we say, interesting?

So, no lovingly arranged book shelfies yet but watch this space!

This is the final part of the orange book pile – enjoy!

The Burning Page by Genevieve Cogman

“The third title in Genevieve Cogman’s clever and exciting The Invisible Library series, The Burning Page is an action-packed literary adventure!

Librarian spy Irene has professional standards to maintain. Standards that absolutely do not include making hasty, unplanned escapes through a burning besieged building. But when the gateway back to your headquarters dramatically malfunctions, one must improvise. And after fleeing a version of Revolutionary France astride a dragon (also known as her assistant, Kai), Irene soon discovers she’s not the only one affected. Gates back to the Library are malfunctioning across a multitude of worlds, creating general havoc. She and Kai are tasked with a mission to St Petersburg’s Winter Palace, to retrieve a book which will help restore order.

However, such plans rarely survive first contact with the enemy – particularly when the enemy is the traitor Alberich. A nightmare figure bent on the Library’s destruction, Alberich gives Irene a tainted ‘join me or die’ job offer. Meanwhile, Irene’s old friend Vale has been damaged by exposure to Chaotic forces and she has no idea how to save him. When another figure from her past appears, begging for help, Irene has to take a good hard look at her priorities. And of course try to save the Library from absolute annihilation. Saving herself would be a bonus.

This is the third book in The Invisible Library series which I love! I have yet to read this instalment, but am sure it will deliver lots of world-jumping, supernatural, bookish goodness!

The Scarecrow Queen by Melinda Salisbury

As the Sleeping Prince tightens his hold on Lormere and Tregellan, the net closes in on the ragged band of rebels trying desperately to defeat him. Twylla and Errin are separated, isolated, and running out of time. The final battle is coming, and Aurek will stop at nothing to keep the throne forever . . .

Explosive, rich and darkly addictive, this is the stunning conclusion to Mel Salisbury’s internationally best-selling trilogy that began with The Sin Eater’s Daughter.

I am ashamed to admit this is one of the many trilogies that I have yet to finish. I’m not sure exactly why but I often hold off on reading the third book in a trilogy because I don’t want the series to be over. Will have to reread the first two books, then read this. 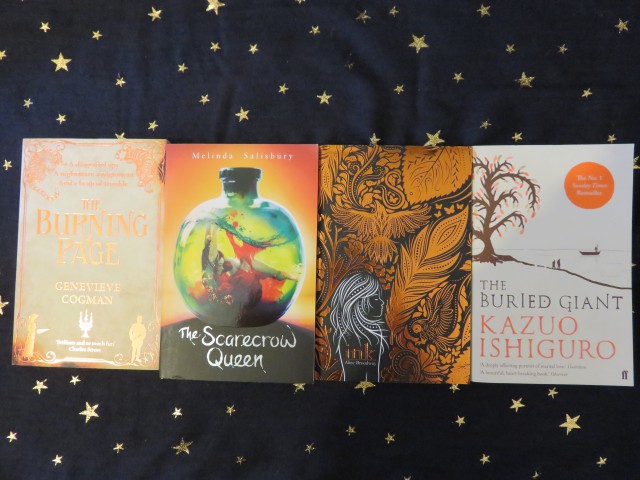 Every action, every deed, every significant moment is tattooed on your skin for ever. When Leora’s father dies, she is determined to see her father remembered forever. She knows he deserves to have all his tattoos removed and made into a Skin Book to stand as a record of his good life. But when she discovers that his ink has been edited and his book is incomplete, she wonders whether she ever knew him at all.

Have heard lots of people talking about this without ever actually managing to pick up much about the storyline or contents. The cover is stunning so I hope that I will get to this soon.

The Buried Giant by Kazuo Ishiguro

‘You’ve long set your heart against it, Axl, I know. But it’s time now to think on it anew. There’s a journey we must go on, and no more delay…’

The Buried Giant begins as a couple set off across a troubled land of mist and rain in the hope of finding a son they have not seen in years.

I really enjoyed this, and it most definitely is fantasy regardless of any comments Ishiguro has made about it (Still can’t quite believe that he got into an argument with Ursula K. Le Guin after he talked down about fantasy books!). Like most of Ishiguro’s work, it is a bit odd but contains lots of observations about the minutiae of human existence. I liked the relationship between the old couple we follow throughout the book and appreciated that the protagonists were not what you would usually find in a fantasy novel.

Which orange books do you have on your shelves?

Have you read any of the books featured today or would you like to?