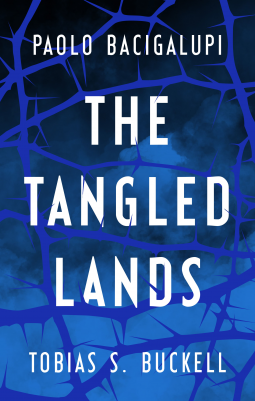 Published by Head of Zeus

Khaim clings to life. Flooded with refugees and slowly starving, the last city of a once-great empire is surrounded by a choking thicket of toxic bramble. This is a world poisoned by magic. Every time a spell is cast, the bramble advances, sprouting in tilled fields and roof beams, thrusting up from between cobblestones and bursting forth from sacks of powdered spice. A bit of magic, and bramble follows. A little at first, and then more – until whole cities are dragged down under tangling vines. Armies hack and burn… but in a world that can’t give up magic’s sweet succour, the bramble can’t be stopped.

Or can it? After ten years of research, an alchemist believes he has found a potent new weapon to wield against the bramble. His invention promises freedom from fear, freedom from hunger, freedom from the rule of Khaim’s tyrant, the Jolly Mayor. But these are twisted times – there are no easy answers, only unforeseen consequences…

Award-winning authors Paolo Bacigalupi and Tobias S. Buckell have created a radical and darkly relevant fantasy, conjuring the collapse of a civilization, smothered by its addictions. This is a world of glittering memories and a desperate present, where everyone uses just a little magic… and someone else always pays the price.

Why I can’t wait to read this:

Which other books are you looking forward to?

Please link your ‘Waiting on Wednesday’ posts below as I’d love to read them!

See my ‘Waiting on Wednesday’ for last week – The Exact Opposite of Okay, or the week before To Kill a Kingdom

Read a book review of Nyxia, Folk or Hold Back the Stars ?

Waiting on Wednesday was created by Breaking the Spine