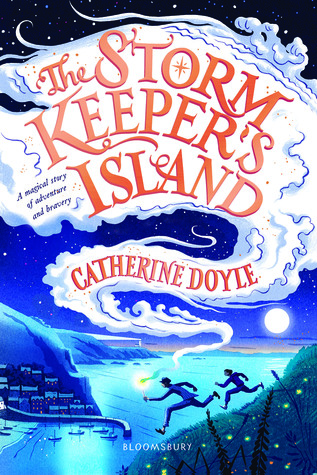 Fionn Boyle and his older sister Tara have been sent to stay with their grandfather on the remote island of Arranmore for the summer. Though Fionn has never met his grandfather before – an eccentric old man who lives in a tiny cottage filled to the brim with candles – he knows he comes from a long line of brave lifeboat men, who wear the sea behind their eyes.

Fionn is scared of the sea. He has no interest in adventure or shipwrecks or the restless wind that rustles through the island, as though in search of something. But an old magic is stirring deep inside the layers of Arranmore, and it is calling out to Fionn. A dark storm is coming, through time and over sea, the same storm that took his father twelve years ago. To protect his family, Fionn must embrace his destiny as the Storm Keeper’s heir and face the fear that has haunted him for as long as he can remember.

Why I can’t wait to read this book:

(I am actually cheating a little with this as I have read an e-ARC already and absolutely adored it! However, I am still eagerly anticipating the publication date because I can’t wait to get my hands on a few finished copies and start pushing this book into the hands of lots of other readers!)

Is this book on your TBR pile too or are you planning to add it?

Which books are you eagerly anticipating?

While you’re here, why not check out my reviews of some other great middle-grade books such as Ban This Book, Flower Moon, Shadow Weaver, The Bookshop Girl, How To Catch a Witch, Amelia Fang and the Barbaric Ball or Do You Speak Chocolate?