Welcome back to another week of #SixforSunday

The theme for this week  is rainbow books. I started browsing my bookshelves for books with rainbow-coloured covers…but it was surprisingly difficult to find enough!

Here’s what I came up with… 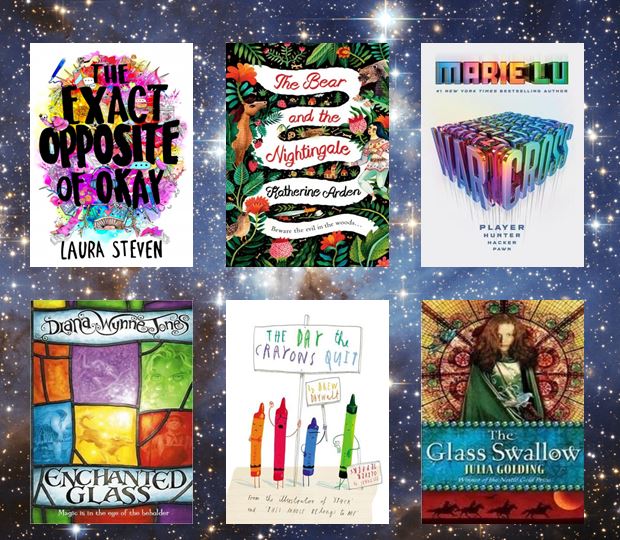 The Exact Opposite of Okay by Laura Steven

Izzy O’Neill is an aspiring comic, an impoverished orphan, and a Slut Extraordinaire. Or at least, that’s what the malicious website flying round the school says. Izzy can try all she wants to laugh it off – after all, her sex life, her terms – but when pictures emerge of her doing the dirty with a politician’s son, her life suddenly becomes the centre of a national scandal. Izzy’s never been ashamed of herself before, and she’s not going to start now. But keeping her head up will take everything she has…

This has (deservedly!) featured in #SixforSunday before. Not only does it have a beautiful, colourful cover, but this book has a snarky, sarcastic protagonist who refuses to sit back and take it whenever she is slut-shamed online. If you haven’t read this already, you need to!

The Bear and the Nightingale by Katherine Arden

At the edge of the Russian wilderness, winter lasts most of the year and the snowdrifts grow taller than houses. But Vasilisa doesn’t mind–she spends the winter nights huddled around the embers of a fire with her beloved siblings, listening to her nurse’s fairy tales. Above all, she loves the chilling story of Frost, the blue-eyed winter demon, who appears in the frigid night to claim unwary souls. Wise Russians fear him, her nurse says, and honor the spirits of house and yard and forest that protect their homes from evil.

I can’t believe that this book hasn’t featured before in #SixforSunday because I love it! I read it earlier this year and was completely transported to the wild, snowy north of Russia. It draws on lots of Russian folklore and I loved Vailisa, Morozko and Solovey. One of my top reads this year so highly recommended!

For the millions who log in every day, Warcross isn’t just a game – it’s a way of life. Struggling to make ends meet, teenage hacker Emika Chen works as a bounty hunter, tracking down players who bet on the game illegally. When Emika hacks into the game illegally, she’s convinced she’ll be arrested, and is shocked when she gets a call from the game’s creator, the elusive young billionaire Hideo Tanaka, with an irresistible offer. He needs a spy on the inside of this year’s tournament in order to uncover a security problem . . . and he wants Emika for the job.

This was the first book I thought off when given the prompt for a ‘rainbow’ cover, especially as the main character, Emika, also has rainbow-coloured hair. I really enjoyed this  and, if you like Ready Player One or the idea of a virtual gaming world, you will too. Book 2, Wildcard, is due out soon!

When Andrew Hope’s magician grandfather dies, he leaves his house and field-of-care to his grandson who spent much of his childhood at the house. Into this mix comes young Aidan Cain, who turns up from the orphanage asking for safety. Who he is and why he’s there is unclear, but a strong connection between the two becomes apparent.

There is a certain generation who grew up with Diana Wynne Jones – Howl’s Moving Castle, Chrestomanci, etc – and she is an absolute master (mistress?) of magic, awe and wonder. I don’t know how her books aren’t more popular than they are. If you haven’t already read them, please don’t miss out!

The Day the Crayons Quit by Drew Daywalt and Oliver Jeffers

Poor Duncan just wants to color. But when he opens his box of crayons, he finds only letters, all saying the same thing: We quit!

Beige is tired of playing second fiddle to Brown. Blue needs a break from coloring all that water, while Pink just wants to be used. Green has no complaints, but Orange and Yellow are no longer speaking to each other.

What is Duncan to do?

This is a hilarious book about a box of crayons quitting because of unequal treatment by their owner – each crayon writes a letter to explain why they are leaving! Oliver Jeffer‘s wonderful illustrations fill this book with charm and character. I have seen this being used in lots of classrooms to great effect – even better, adapt it and have something else in your classroom quit because of poor treatment!

The Glass Swallow by Julia Golding

Living above her father’s workshop, Rain secretly designs stained glass but when she is discovered she must go to the strange new land of Magharna. Bandits roam the lonely roads and when Rain is ambushed she knows that she cannot win the fight. That is until a boy with a falcon saves her and an adventure of a lifetime begins.

This story is based around a young girl challenging gender stereotypes and travelling to a far-away country to find her fortune. Despite some parts not aging very well (E.g. Peri’s over-protective behaviour comes across as more controlling than cute!), this is still a slid and fun fantasy novel. It is actually a sequel to Dragonfly, but can be read as a stand-alone as it is simply set in the same world and has a cameo appearance of characters from the first book (I read them the wrong way around and it didn’t impact on my understanding at all).

Do you have any books with multi-coloured covers on your shelves?

Have you read any of the books I mentioned or would you like to?

Let me know in the comments