Six for Sunday: Books people always tell me to read

The theme for this week of #SixforSunday is books that are always being recommended to you.

This list would have once been a lot longer but since joining the book blogging world about a year ago, I have read lots of books that I see around and hear people talking about. Here are six, however, that I have not yet managed to read, despite lots and lots of people telling me that I should! 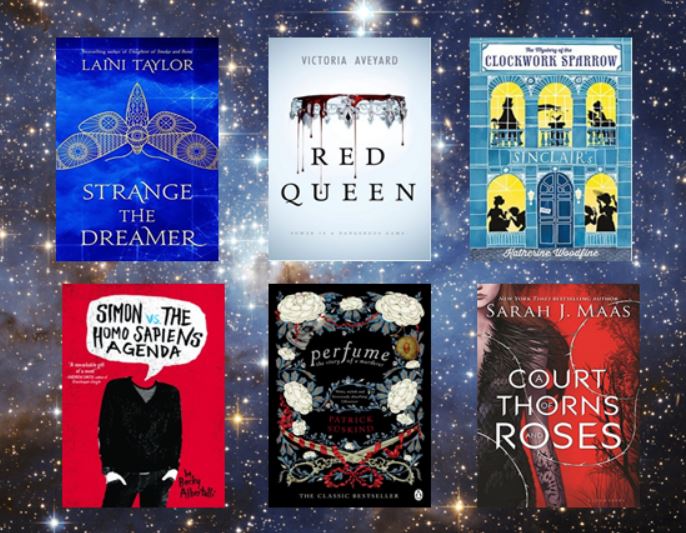 The dream chooses the dreamer, not the other way around—and Lazlo Strange, war orphan and junior librarian, has always feared that his dream chose poorly. Since he was five years old he’s been obsessed with the mythic lost city of Weep, but it would take someone bolder than he to cross half the world in search of it. Then a stunning opportunity presents itself, in the person of a hero called the Godslayer and a band of legendary warriors, and he has to seize his chance or lose his dream forever.

I loved the Daughter of Smoke and Bone series so I know I will get to this one sooner or later!

This is a world divided by blood – red or silver. The Reds are commoners, ruled by a Silver elite in possession of god-like superpowers. And to Mare Barrow, a seventeen-year-old Red girl from the poverty-stricken Stilts, it seems like nothing will ever change. That is until she finds herself working in the Silver Palace. Here, surrounded by the people she hates the most, Mare discovers that, despite her red blood, she possesses a deadly power of her own. One that threatens to destroy the balance of power.

I have most of this series sitting on my bookshelf after my sister gave it to me, but have yet to read it. This was a Goodreads Choice winner in 2015, so I am a few years late, but I am gradually catching up on all the books I missed whilst living overseas (I lived abroad between 2005 and 2015 so had very limited access to new titles!).

You are cordially invited to attend the Grand Opening of Sinclair’s department store!

Enter a world of bonbons, hats, perfumes and MYSTERIES around every corner. WONDER at the daring theft of the priceless CLOCKWORK SPARROW! TREMBLE as the most DASTARDLY criminals in London enact their wicked plans! GASP as our bold heroines, Miss Sophie Taylor and Miss Lilian Rose, CRACK CODES, DEVOUR ICED BUNS and vow to bring the villians to justice…

I am currently working my way through the Murder Most Unladylike series, another MG mystery series and am really enjoying it so I am hoping to get started on this one too.

Simon vs. The Homo Sapiens Agenda

Sixteen-year-old and not-so-openly gay Simon Spier prefers to save his drama for the school musical. But when an email falls into the wrong hands, his secret is at risk of being thrust into the spotlight. Now Simon is actually being blackmailed: if he doesn’t play wingman for class clown Martin, his sexual identity will become everyone’s business. Worse, the privacy of Blue, the pen name of the boy he’s been emailing, will be compromised.

I know, I know, I am a few years behind on this one, particularly with the release of the movie. Knowing me, it will be years before I see the movie anyway so no need to worry. I have just borrowed this book from the library so should be reading it soon!

In the slums of eighteenth-century France, the infant Jean-Baptiste Grenouille is born with one sublime gift – an absolute sense of smell. As a boy, he lives to decipher the odors of Paris, and apprentices himself to a prominent perfumer who teaches him the ancient art of mixing precious oils and herbs. But Grenouille’s genius is such that he is not satisfied to stop there, and he becomes obsessed with capturing the smells of objects such as brass doorknobs and fresh-cut wood. Then one day he catches a hint of a scent that will drive him on an ever-more-terrifying quest to create the “ultimate perfume” – the scent of a beautiful young virgin.

About 4 or 5 people have recommended this to me, but I have yet to read it. Someday, maybe! I like the fact that it is set in Paris, but crime is not normally my thing so I am a it unsure about this one.

A Court of Thorns and Roses

Feyre’s survival rests upon her ability to hunt and kill – the forest where she lives is a cold, bleak place in the long winter months. So when she spots a deer in the forest being pursued by a wolf, she cannot resist fighting it for the flesh. But to do so, she must kill the predator and killing something so precious comes at a price …

Dragged to a magical kingdom for the murder of a faerie, Feyre discovers that her captor, his face obscured by a jewelled mask, is hiding far more than his piercing green eyes would suggest.

I have actually read the first one in this series quite recently, but have not continued yet. I thought that the first book was okay, but have heard a few mixed things about later books in the series so am unsure about continuing, especially when there are so many other books on the TBR list crying out to be read!

Some books that I HAVE read because of book twitter include The Six of Crows, Crooked Kingdom and The Grisha Trilogy, Boy in the Tower, After the Fire, Wing Jones and The Exact Opposite of Okay. I probably would have picked up some of these anyway, if I had spotted them in the library or  bookshop, but I have probably read them sooner thanks to seeing lots of book bloggers shouting about them!

Have you read any of these books? Which would you recommend?

Which books are always being recommended to you?

Which books would you recommend for me to read?

Books that have made me laugh

Books that have made me cry

Books that have made me want to shout