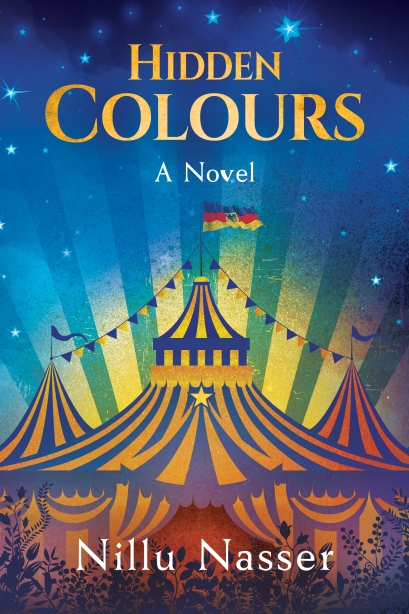 *In a city that thrills like a kaleidoscope, refugees struggle to rebuild the rubble of their lives.*

Each evening, nestled in Berlin’s Treptower Park, the immigrant circus comes to life. Ellie is passionate about the circus, Germany’s flagship integration project, and drawn to its broken people. Even so, if she wants to keep her job at the newspaper, she must head up a campaign against it.

When Yusuf fled Syria, he lost everything. Now the circus, with its middle-eastern flair, is the only home he knows. When the lights go on, the refugees dazzle their audience, but off-stage they can’t escape the traumas of their past and the far-right radicals that dog their every move.

One night, in the midst of a show, two young circus boys come to blows. The resulting violence shines a spotlight on the refugee estate and swells the tide of public opinion against the immigrant circus.

As tensions rise and with the circus at risk of closure, Ellie must convince her readers that we can have compassion for those we fear or Yusuf will be forced to uproot again.

“Nasser eloquently explores racism, Islamophobia, and xenophobia through a narrative that’s tender, haunting, and fearless. Yusuf is a particularly memorable character with a complex architecture of inner turmoil about his identity in this strange land and the traumatic losses that drove him from his homeland. The city of Berlin plays an intricate part of Hidden Colours as Nasser draws on its history to illuminate the irony and hypocrisy of political and cultural views threaded through this novel, while also painting a vivid portrait of the celebration of cultural diversity to offset the uglier side of the populace. Hidden Colours is an unforgettable tale of personal trauma and social justice.” ~ Caitlin Lyle Farley, Readers’ Favorite Book Reviews

“Nasser brings characters to life with sharp dialogue, heartfelt atmospheric description, and some quite shocking violence which is painfully realistic to our time. Ellie and Yusuf really pave the way for an exciting future of heroes in fiction. Overall, Hidden Colours is a must-read for those who enjoy interpersonal drama and are also concerned with the cold, discriminatory hatred that’s seeping into our world.” ~ K.C. Finn, Readers’ Favorite Book Reviews

“Hidden Colours by Nillu Nasser is the breathtaking, emotionally raw and politically stimulating novel about a young refugee fighting to build a home in a strange land. I was taken along on a provocative, heartfelt journey from the first page to the striking conclusion. The end stunned me, leaving me reverberating with unchecked emotion. The author managed to create a breathtaking and colorful story world all her own, with characters with which one can easily sympathize. Her themes lent extra depth, drawing in the reader, compelling them to hear her daring, yet peaceful message of compassion and hope.” ~ Alyssa Elmore, Readers’ Favorite Book Reviews

Find this book on Amazon.

Five reasons why I can’t wait to read this:

Nillu Nasser is a writer of literary fiction novels. Her books include: All the Tomorrows (2017) and Hidden Colours (2018). An Ocean of Masks is due to be released in 2019. Nillu has a BA in English and German Literature, and an MA in European Politics. After graduating she worked in national and regional politics, but eventually reverted to her first love: writing. She lives in London with her husband and three children. For further information or to say hello, visit http://www.NilluNasser.com.

Don’t miss the other stops on this blog tour!