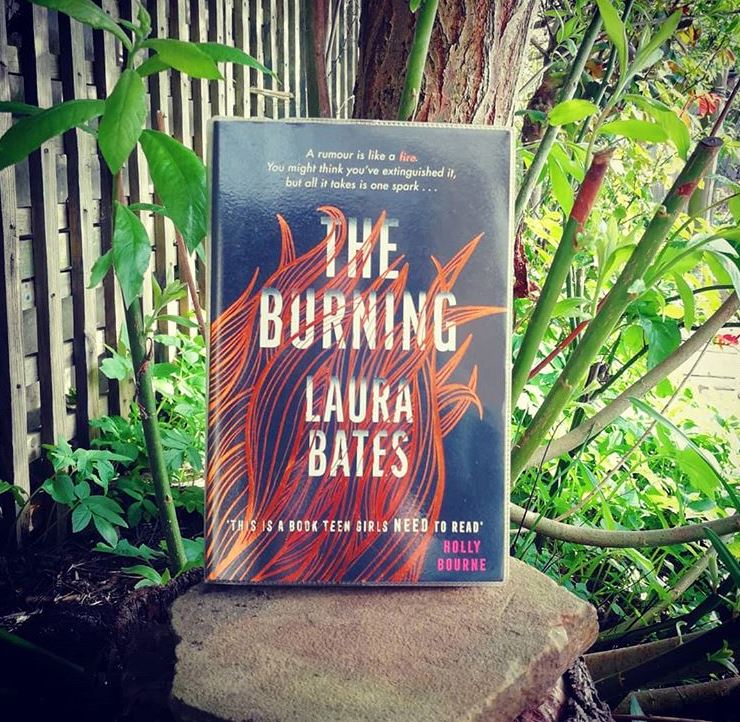 Published by Simon and Schuster

‘The Burning lights a fire in you – one that makes you want to fight for change and ignite sparks in others so the fire spreads and spreads.’ – HOLLY BOURNE

A rumour is like a fire. You might think you’ve extinguished it but one creeping, red tendril, one single wisp of smoke is enough to let it leap back into life again. Especially if someone is watching, waiting to fan the flames …

There’s nothing to trace Anna back to her old life. Nothing to link her to the ‘incident’.

At least that’s what she thinks … until the whispers start up again. As time begins to run out on her secrets, Anna finds herself irresistibly drawn to the tale of Maggie, a local girl accused of witchcraft centuries earlier. A girl whose story has terrifying parallels to Anna’s own…

The compelling YA debut from Laura Bates, founder of the Everyday Sexism Project and bestselling author of Girl Up.

PRAISE FOR GIRL UP:
‘A bracing love letter to today’s teenage girls’ – Sunday Times
‘Essential reading for young women and girls’ –   Morning Star Online
‘This no-nonsense guide to being a girl in 2016 is one all teen girls should read’ – Red magazine
‘If you have a daughter or a niece or a younger sister or a goddaughter, buy it for them now’ — The Pool

PRAISE FOR EVERYDAY SEXISM:
‘This is an important book’ – Independent
‘A potent reminder of how far feminism has come and how far it has to go’ – Kirkus Reviews
‘A game-changing book, a must-read for every woman’ – Cosmopolitan
‘Funny and clever’ – Telegraph

Lish murmurs something about how it’s going to get better and they’ll run out of steam eventually. But we all know that’s not how it works. It might get a bit better after a while. But I’ll still always be that girl.

The taunts won’t go away, not completely. It’ll always be waiting just beneath the surface, any time anyone wants a stick to beat me with. It’s there online, waiting for new people to find when I meet them.

The whispers won’t die. The insults will never stop.

First impressions: I wanted to read this initially because of the author. Having followed the Everyday Sexism project for several years and read Laura Bates’ first book, Everyday Sexism, I was interested to see how she would use that in a fictional narrative. In many ways, fiction allows writers to deal with issues in a way that they cannot do in non-fiction, as they can appeal to emotions rather than sticking solely to facts. Sexism is something that affects everyone, regardless of gender, age or race and I felt that fiction might allow the author to raise questions about this issue in a different way to how she has done in non-fiction.

I am also interested in witchcraft and how accusations of witchcraft disproportionately affect women. When I saw that this book would also follow a woman who has been accused of witchcraft, I became even more interested. Luckily, my lovely library ordered in a copy for me so I was able to get stuck in!

The story follows a teenage girl, Anna, and her mother as they move to Scotland after the death of Anna’s father and in response to online bullying Anna faced at her last school. The details of what happened and how it was handled are drip-fed throughout the novel and I was shocked at the full extent of what Anna was put through and even more so, by the response of those around her who should be protecting her such as teachers, the police, the social media sites involved. Knowing that everything Anna experienced in the novel was based on testimonies from real girls who have suffered this type of bullying made reading this even harder.

As the bullying she fled Birmingham to escape catches up  with her in Scotland, Anna retreats into historical research, trying to track down information about a woman called Maggie who was accused of witchcraft after the man who raped and impregnated her dies at sea. The double standards that Maggie faces, centuries earlier, draw a depressing parallel with what Anna faces in modern Britain, as many of the adults around her say she must take responsibility for the choice she made, rather than recognising that she is a victim.

This is a tough book to read because of the sheer vindictiveness of the attacks on Anna and how willing everyone is to go along with it, but it is also an important book, forcing readers to challenge their own assumptions and biases.

I’ve read something, in one of my research books, a saying that goes: “We are the granddaughters of the witches you could not burn.”

I think about Maggie, about the necklace, about her baby, about walking in her shoes. I feel like a little piece of her is inside me now, holding me up, helping me to stand straighter. And I whisper to myself: “We are the granddaughters of the witches you burned. And we’re not putting up with it any more.”

What I liked: Anna’s relationship with her mother, the friendship between herself, Cat and Lish, the message that Anna’s treatment is not okay and something has to change, the historical details mixed into Maggie’s story (e.g. the witch marks, etc).

Even better if: I felt that the ending was a little rushed and unrealistic, particularly the scene in the canteen. I would have liked to see a bit more of things changing gradually, or Anna and those around her continuing to stand up for themselves as the inevitable micro-aggressions continue.

How you could use it in your classroom: Anyone working with young people should read this. I was shocked at just how nasty Anna’s treatment became and knowing that it is based on real experiences from a number of girls around the world made me angry and determined to do better to support young people going through bullying in this form. This would be an excellent and controversial book to use in upper-secondary schools to spark a discussion and I can guarantee that you might be shocked to discover than many of the young people in your classroom have experienced something similar or have strong views about Anna ‘deserving’ what she got.

Watch this video of the author talking about her inspiration behind this book:

“I would consider this also a book that is essential for parents of teens to read as well, the story told from Anna’s perspective really emphasises the damage and misery one action can cause. “

“All the story of the “witch” was quite interesting, and it was intense. I was so angry for her”

“I think that this book highlights a lot of important issues such as slut-shaming, double standards, bullying, the negative and positive aspects of social media.”

(Thank you to my local library for ordering in a copy for me!)

While you’re here, why not check out my reviews of Summer Bird Blue, Ayesha At Last, No Ballet Shoes in Syria, Juniper Lemon’s Happiness Index, The Cruel Prince, Tangleweed and Brine, Power to the Princess or Welcome to Our World?