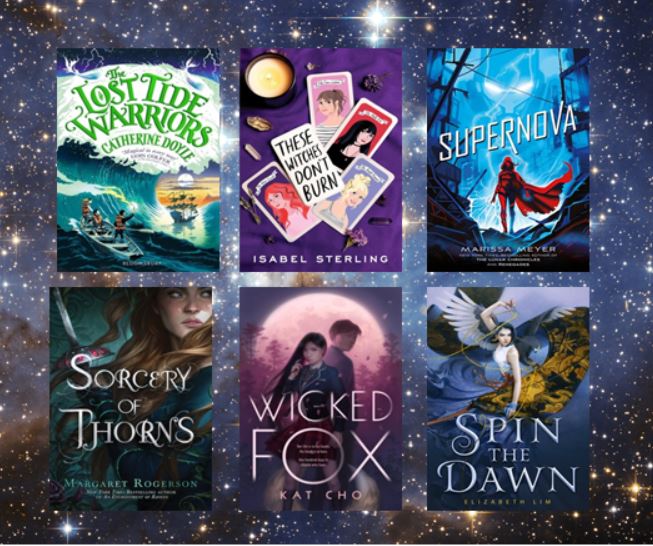 Fionn Boyle has been Storm Keeper of Arranmore for less than six months when thousands of terrifying Soulstalkers arrive on the island. The empty-eyed followers of the dreaded sorceress, Morrigan have come to raise their leader and Fionn is powerless to stop them. The Storm Keeper’s magic has deserted him and with his grandfather’s memory waning, Fionn must rely on his friends Shelby and Sam to help him summon Dagda’s army of merrows.

But nobody else believes the ferocious sea creatures even exist. And how can he prove he’s right without any magic? As Fionn begins his search for the lost army, the other islanders prepare for invasion. The battle to save Arranmore has begun.

I loved the first book in the series so much that I simply cannot wait to get my hands on this as soon as possible!

Hannah’s a witch, but not the kind you’re thinking of. She’s the real deal, an Elemental with the power to control fire, earth, water, and air. But even though she lives in Salem, Massachusetts, her magic is a secret she has to keep to herself. If she’s ever caught using it in front of a Reg (read: non-witch), she could lose it. For good. So, Hannah spends most of her time avoiding her ex-girlfriend (and fellow Elemental Witch) Veronica, hanging out with her best friend, and working at the Fly by Night Cauldron selling candles and crystals to tourists, goths, and local Wiccans.

But dealing with her ex is the least of Hannah’s concerns when a terrifying blood ritual interrupts the end-of-school-year bonfire. Evidence of dark magic begins to appear all over Salem, and Hannah’s sure it’s the work of a deadly Blood Witch. The issue is, her coven is less than convinced, forcing Hannah to team up with the last person she wants to see: Veronica.

While the pair attempt to smoke out the Blood Witch at a house party, Hannah meets Morgan, a cute new ballerina in town. But trying to date amid a supernatural crisis is easier said than done, and Hannah will have to test the limits of her power if she’s going to save her coven and get the girl, especially when the attacks on Salem’s witches become deadlier by the day.

Anything with witches and I am sold! This sounds fascinating!

All’s fair in love and anarchy…

The epic conclusion to Marissa Meyer’s thrilling Renegades Trilogy finds Nova and Adrian struggling to keep their secret identities concealed while the battle rages on between their alter egos, their allies, and their greatest fears come to life. Secrets, lies, and betrayals are revealed as anarchy once again threatens to reclaim Gatlon City.

I loved the first book in this trilogy and liked the second one to continue reading. I have a feeling that this book is going to be very different to how I might imagine things turning out, but I cannot wait to read.

Sorcery of Thorns by Margaret Rogerson

All sorcerers are evil. Elisabeth has known that as long as she has known anything. Raised as a foundling in one of Austermeer’s Great Libraries, Elisabeth has grown up among the tools of sorcery—magical grimoires that whisper on shelves and rattle beneath iron chains. If provoked, they transform into grotesque monsters of ink and leather. She hopes to become a warden, charged with protecting the kingdom from their power.

Then an act of sabotage releases the library’s most dangerous grimoire. Elisabeth’s desperate intervention implicates her in the crime, and she is torn from her home to face justice in the capital. With no one to turn to but her sworn enemy, the sorcerer Nathaniel Thorn, and his mysterious demonic servant, she finds herself entangled in a centuries-old conspiracy. Not only could the Great Libraries go up in flames, but the world along with them.

As her alliance with Nathaniel grows stronger, Elisabeth starts to question everything she’s been taught—about sorcerers, about the libraries she loves, even about herself. For Elisabeth has a power she has never guessed, and a future she could never have imagined.

The summary makes this sound like my cup of tea! It sounds like there is magic and books galore so I am looking forward to this!

A fresh and addictive fantasy-romance set in modern-day Seoul.

Eighteen-year-old Gu Miyoung has a secret–she’s a gumiho, a nine-tailed fox who must devour the energy of men in order to survive. Because so few believe in the old tales anymore, and with so many evil men no one will miss, the modern city of Seoul is the perfect place to hide and hunt.

But after feeding one full moon, Miyoung crosses paths with Jihoon, a human boy, being attacked by a goblin deep in the forest. Against her better judgment, she violates the rules of survival to rescue the boy, losing her fox bead–her gumiho soul–in the process.

Jihoon knows Miyoung is more than just a beautiful girl–he saw her nine tails the night she saved his life. His grandmother used to tell him stories of the gumiho, of their power and the danger they pose to humans. He’s drawn to her anyway.

With murderous forces lurking in the background, Miyoung and Jihoon develop a tenuous friendship that blossoms into something more. But when a young shaman tries to reunite Miyoung with her bead, the consequences are disastrous . . . forcing Miyoung to choose between her immortal life and Jihoon’s.

Fantasy based on Korean folklore? Yes please! So excited to read this, particularly as it features some of my favourite mythological creatures, the cunning kitsune (fox spirits)

Spin the Dawn by Elizabeth Lim

Project Runway meets Mulan in this sweeping YA fantasy about a young girl who poses as a boy to compete for the role of imperial tailor and embarks on an impossible journey to sew three magic dresses, from the sun, the moon, and the stars.

Maia Tamarin dreams of becoming the greatest tailor in the land, but as a girl, the best she can hope for is to marry well. When a royal messenger summons her ailing father, once a tailor of renown, to court, Maia poses as a boy and takes his place. She knows her life is forfeit if her secret is discovered, but she’ll take that risk to achieve her dream and save her family from ruin. There’s just one catch: Maia is one of twelve tailors vying for the job.

Backstabbing and lies run rampant as the tailors compete in challenges to prove their artistry and skill. Maia’s task is further complicated when she draws the attention of the court magician, Edan, whose piercing eyes seem to see straight through her disguise.

And nothing could have prepared her for the final challenge: to sew three magic gowns for the emperor’s reluctant bride-to-be, from the laughter of the sun, the tears of the moon, and the blood of stars. With this impossible task before her, she embarks on a journey to the far reaches of the kingdom, seeking the sun, the moon, and the stars, and finding more than she ever could have imagined.

Steeped in Chinese culture, sizzling with forbidden romance, and shimmering with magic, this young adult fantasy is pitch-perfect for fans of Sarah J. Maas or Renée Ahdieh.

Everything about this just makes me want to read it now!

Which 2019 releases are you excited for?

Books that have made me laugh

Books that have made me cry

Books that have made me want to shout

Books people are always telling me to read

Books that have been on the TBR pile forever

Books I want to reread

Books I wish I had as a teen

Authors who should collaborate

Characters I want to see together

2018 books everyone needs to read

If you like, link your #SixforSunday posts below and I will check them out!