Waiting on Wednesday: House of Salt and Sorrows 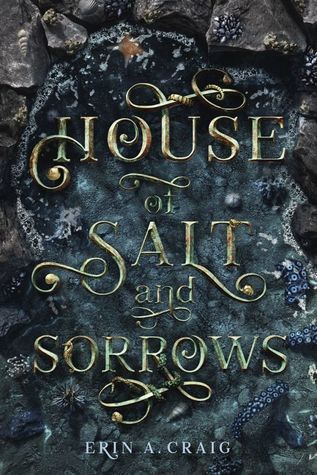 House of Salt and Sorrows

Written by Erin A. Craig

In a manor by the sea, twelve sisters are cursed.

Annaleigh lives a sheltered life at Highmoor, a manor by the sea, with her sisters, their father, and stepmother. Once they were twelve, but loneliness fills the grand halls now that four of the girls’ lives have been cut short. Each death was more tragic than the last—the plague, a plummeting fall, a drowning, a slippery plunge—and there are whispers throughout the surrounding villages that the family is cursed by the gods.

Disturbed by a series of ghostly visions, Annaleigh becomes increasingly suspicious that the deaths were no accidents. Her sisters have been sneaking out every night to attend glittering balls, dancing until dawn in silk gowns and shimmering slippers, and Annaleigh isn’t sure whether to try to stop them or to join their forbidden trysts. Because who—or what—are they really dancing with?

When Annaleigh’s involvement with a mysterious stranger who has secrets of his own intensifies, it’s a race to unravel the darkness that has fallen over her family—before it claims her next.

Why I can’t wait to read this:

Does this sound like the kind of book you would enjoy?

Will you be reading this or do you have any other anticipated releases you would recommend to me?

See some other Waiting on Wednesday posts here:  When the Mountains Roared, The Exact Opposite of Okay, To Kill a Kingdom, Starfish, The Gloaming, The Smoke Thieves, The Way You Make Me Feel, The Queens of Innis Lear, Legendary, Nyxia Unleashed, Bright Ruin, A Thousand Beginnings and Endings, Empress of All Seasons, Tempests and Slaughter, Grim Lovelies, The Glass of Lead and Gold, Storm Witch, The Way Past Winter, The Gilded Wolves, Fierce Fairytales, Descendant of the Crane. Dragon Pearl, Last of Her Name. The Familars. A Pinch of Magic, A Witch Come True, The Winter of the Witch. Once Upon a River, A Curse So Dark and Lonely, Shadowscent, Romanov. Echo North, The Wicked King, The Priory of the Orange Tree, Spin the Dawn, Master of Sorrows, Asha and the Spirit Bird, A Treason of Thorns, We Rule The Night, Perfectly Preventable Deaths, Collision, Rumblestar, The Last Spell Breather, The Starless Sea, The Lost Tide Warriors, The Princess Who Flew With Dragons, Containment.

While you’re here, why not check out my reviews of The Hazel Wood, Tangleweed and Brine, Summer Bird Blue, The Pretender or The Gilded King?