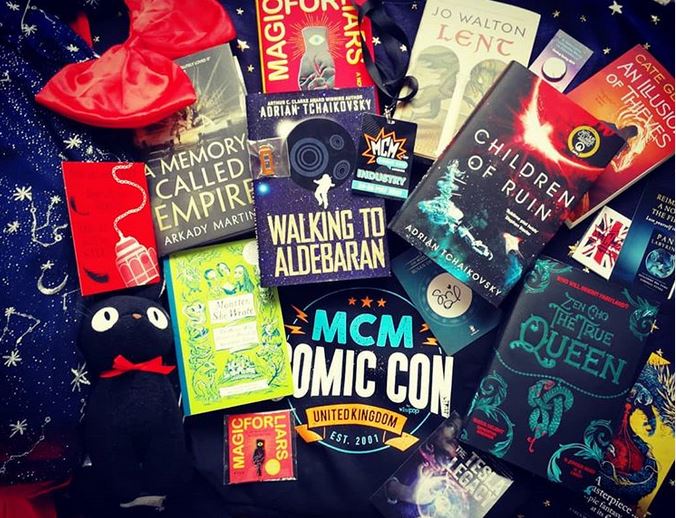 I was delighted to be invited to attend the very first MCM Blogger Brunch, with access to the main MCM ComicCon after the brunch finished. Thank you so much to Jamie-Lee Nardone for my invitation!

Originally, I was just going to wear jeans and a t-shirt, but figured that my first attendance at MCM ComicCon needed a bit more effort – so I attended as Kiki the witch from Kiki’s Delivery Service, complete with giant red bow and a plushie Jiji the black cat with me. This proved to be a wise decision as the bow helped several people to find me among the tides of people who aren’t so vertically challenged!

At first I wasn’t sure if I had managed to get to the right place, but quickly spotted Beth @BooksNest and Connie @ConnieReads_ which reassured me! It was brilliant to finally put names to faces for people that I have chatted with online but not yet met in real life. I ended up tagging along with Justine @IShouldReadThat , Moon @themoonkestrel , Asha @Cat_book_tea and sat at a table with Donna @donnamk79 , Laura @LaurapRose_ . I also spotted lots of other lovely bloggers but didn’t get a chance to chat with as many as I would have liked!

We were given our ‘industry’ passes, which made us feel super important and made our way into the Comic Con…it was heaving with people! Unusually for a Sunday, tickets had sold out and it seemed like everyone had worked hard on some amazing cosplays. I’m calling mine ‘cosplay-lite’ as it was more of a tribute to the Studio Ghibli movie than a proper cosplay!

Next door to the green room (!) we were fed (thank you!) and got to meet some lovely authors. We were also given an incredible goodie bag, with lots of books which I am excited to read. (Picture below has the goodies plus some books I brought along or bought to get signed)

I am particularly excited to read An Illusion of Thieves and Magic For Liars, both of which sound completely like my kind of thing. Lent is set in Renaissance Florence which has me interested and the non-fiction book of Murder She Wrote, about female writers of horror, sounds fascinating. A Memory Called Empire has already been claimed by my boyfriend and he was exceptionally happy with his signed (and doodled!) books from Adrian Tschaikovsky.

Jamie did a quick introduction, then the authors started to circulate…I was nervous but excited to meet the authors and have a chilled-out chat rather than the rushed few sentences you often have during signing lines.

Susan Dennard was the first author to join our table – I have just read the first book in the Witchlands series so had to beg her not to talk about any spoilers! She talked about her writing process, how excited she was to see a Safi cosplay the day before and cultural differences between the UK and the US, specifically wanting to know if ‘Netflix and chill’ meant the same thing here as it does in the States!

Next, we had the bonus of two authors at one – R.J. Barker and K.K. Perez!

R.J. Barker talked about his series of books and how they don’t really have much ‘assassin-ing’ in them despite the titles. I had not come across them before but they sound brilliant so I will be picking them up!

Kristina spoke about her book The Tesla Legacy which sounds brilliant. I have yet to read any of her books so planning to start with Sweet Black Waves soon!

Next we were joined by Zen Cho and Adrian Tschaikovsky and my fangirl heart nearly exploded!

Adrian Tschaikovsky talked about his writing process and how he doesn’t really become attached to places because, wherever he is, he spends so much time in his imagination and in his own world. My boyfriend had asked me to get his books signed, but Adrian also kindly did some doodles for him!

I was really excited to meet Zen Cho because I loved Sorcerer to the Crown on so many levels. We chatted about her inspiration, Little Women (we were in agreement that Jo and Laurie should have totally ended up together!), fanfiction and fandoms, Chinese TV programmes and growing up in a multilingual and multicultural household.

She also told us about her new novella, The Order of the Pure Moon Reflected in Water which draws inspiration from Chinese wu xia (martial arts) like Crouching Tiger, Hidden Dragon – it sounds great so I am really looking forward to it! She then signed my beloved copy of The True Queen, which already had a place reserved for it on my favourites shelf!

The brunch was so much fun and I loved getting to chat with authors and other bloggers. It was also nice to have people take us seriously as bloggers as I sometimes feel that blogging is looked down on, even though it involves lots of hard work!

I headed downstairs to the main convention floor then to explore. I was happy to find a dorayaki stall (so nostalgic!) and see all of the amazing fanart, etc. Despite it being really crowded, there was a great atmosphere and lots of people chatting excitedly about different fandoms!

I had a great day, although my shoulders ached after carrying so many books!

Once again, thank you so much to Jamie for inviting me and I look forward to attending again in the future, if possible!

Did you attend the MCM Blogger Brunch or MCM Comic Con this year?

Which book did I mention that you would like to read?