This time, the mini-reviews are all themed around mermaids, as I went through a period where I seemed to be reading tonnes of mermaid-related books! 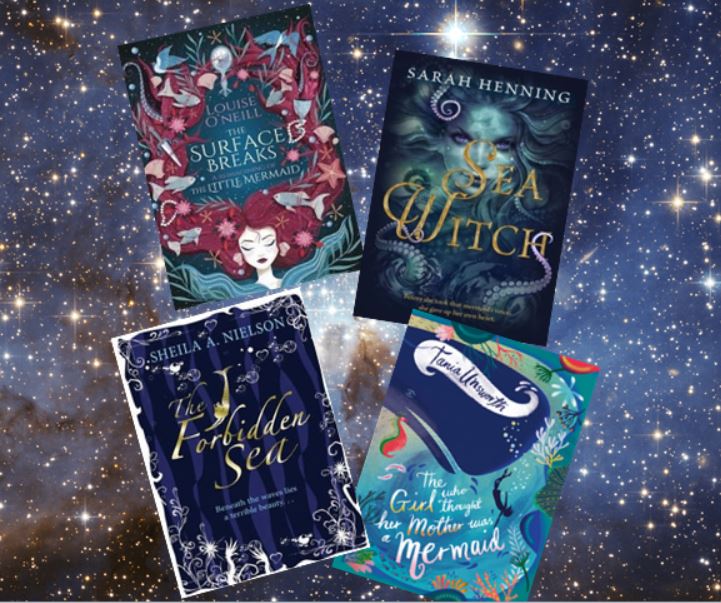 The Surface Breaks by Louise O’Neill

Deep beneath the sea, off the cold Irish coast, Gaia is a young mermaid who dreams of freedom from her controlling father. On her first swim to the surface, she is drawn towards a human boy. She longs to join his carefree world, but how much will she have to sacrifice? What will it take for the little mermaid to find her voice? Hans Christian Andersen’s original fairy tale is reimagined through a searing feminist lens, with the stunning, scalpel-sharp writing and world building that has won Louise her legions of devoted fans. A book with the darkest of undercurrents, full of rage and rallying cries: storytelling at its most spellbinding.

If I had highlighted every bit of this book that I loved, pretty much the entire thing would be coloured in! This is such an interesting perspective on a familiar story which really makes you question how we could have possibly normalised the mutilation and silencing of the main character, all for a man she barely knows. I felt so privileged to hear Louise O’Neill speak about her influences at one of the launch events and devoured most of the book on the train going home. Read it, you won’t regret it!

The Forbidden Sea by Sheila A. Nielson

When Adrianne comes face-to-face with the mermaid of Windwaithe Island, she is convinced that the mermaid means her harm. After all, the island is steeped in stories of mermaids’ curses and the ill-luck that they bring. But Adrianne is fierce-willed and courageous and is determined to protect her family and the islanders from danger. Yet when the islanders find out about Adrianne’s encounters with the mermaid, her family is scorned. They believe that once active, the mermaid cannot be quieted until an islander sacrifices herself to the sea. But is the legend true? And will their fear make them force Adrienne to test it? This is a haunting story of love, surrender and strength.

This has been sitting on my shelf for years and I’m so glad that I finally read it because it was even better than I had hoped it would be!
I can see some readers becoming frustrated with the main character, Adrianne, because she is so stubborn, but I loved her. She has faced a lot of hardship and things, at times, look entirely hopeless. Yet, she is determined to always try to do the right thing. The fact that she loves horses and dogs helps too!
I really enjoyed the first half of the story, where Adrianne is injured by a mermaid when rescuing her sister during a storm. Both she and her sister saw the mermaid, and a local legend on the island tells the story of another young girl, 100 years previously, who was sacrificed to the sea to appease an angry mermaid. The small island culture where everyone knows everyone’s business and rumours move faster than you would consider possible range really true for me. When a fortune-teller says that Adrianne has the mark of the mermaid on her wrist and is, as such, doomed, things look even darker for her future.
It reads like a fairytale, with Adrianne as a Cinderella-like character, being offered the chance for a new life under the ocean. We are given a tantalizing glimpse of the mermaid’s world and the true story behind the legend. Ultimately Adrianne makes a choice, perhaps not the one you would expect but one that fits her character. She made this book.

Everyone knows what happens in the end. A mermaid, a prince, a true love’s kiss. But before that young siren’s tale, there were three friends. One feared, one royal, and one already dead.

Ever since her best friend, Anna, drowned, Evie has been an outcast in her small fishing town. A freak. A curse. A witch.

A girl with an uncanny resemblance to Anna appears offshore and, though the girl denies it, Evie is convinced that her best friend actually survived. That her own magic wasn’t so powerless after all. And, as the two girls catch the eyes—and hearts—of two charming princes, Evie believes that she might finally have a chance at her own happily ever after.

But her new friend has secrets of her own. She can’t stay in Havnestad, or on two legs, unless Evie finds a way to help her. Now Evie will do anything to save her friend’s humanity, along with her prince’s heart—harnessing the power of her magic, her ocean, and her love until she discovers, too late, the truth of her bargain.

I had heard some mixed reports about this, but was still excited to read it and really enjoyed it rather a lot. The story is told by Evie, a girl descended from a family of witches who has to hide her power because it has been outlawed in her part of the world.
I liked the friendship between the main trio, the folklore and festivals of their world and the depiction of magic as something that always demands a price. I also liked the way the end of this story ties into what we know about the original story of The Little Mermaid.
I found it a little hard to believe that Nik’s parents were still happy for him to be friends with Evie, after he endangered his life to save her and with the continued rumours about witchcraft from the villagers. I also felt like Iker was reduced to a plot device with the way his behaviour changed.
Overall though, a creative re-imagining of the folktale, giving a possible origin for the Sea Witch and a story full of friendship, magic and a wonderful sense of the mercurial temper of the sea.

Even though she’s terrified of the sea, a girl who believes her mum might have been a mermaid runs away to the ocean to solve the mystery of who she really is.

Stella is the odd one out. She sleepwalks, is terrified of water, yet obsessed by the ocean. Her mum who died when Stella was eight remains the biggest mystery of all. Who was she and why did she give Stella a necklace called ‘the word of the sea’ before she died? Nobody can give her any answers. Her father is consumed by grief and her grandmother’s memories are fading with dementia.

When Stella’s only friend in the world, Cam, moves house, Stella runs away. She’s determined to find out who her mum was and who she is too. She ends up in the Crystal Cove, a run-down aquarium with a mermaid show. There she meets Pearl who reveals disturbing secrets. It’s only by facing her fear of the ocean that Stella will truly uncover the truth.

This is an exquisitely imagined story about a girl on an adventure above and below the waves.

Lovely MG about a girl who decides to find out if her mother really was a mermaid or not. It is a touching story with a wonderful grandmother, family, friends and a touch of magic. Just brilliant!

Could you recommend any other books featuring mermaids?

Check out more mini-reviews themed around: Girls in Politics or the Sea.