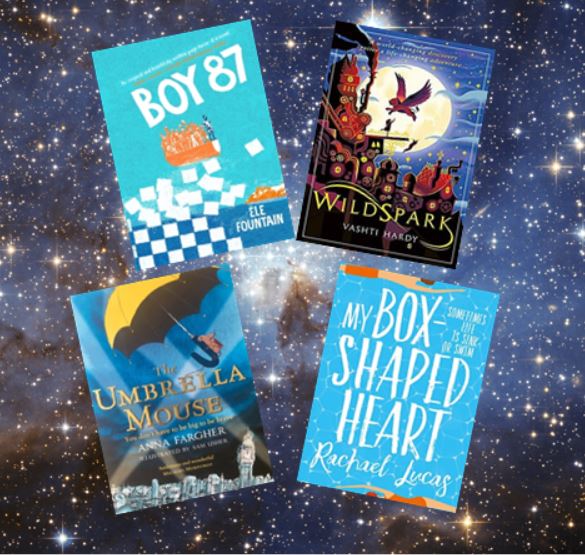 I love my library, don’t you?

Every week I get to discover both anticipated and unexpected new books to read and it’s all completely free!

This week I have picked up a selection of reservations that I made based on books other people have recommended and a general browse which turned up a few interesting sounding books. I would have borrowed more, but have already pretty much maxed out my library card!

What did you borrow from your library this week?

Here are the four I picked up!

Shif is just an ordinary schoolboy who loves chess and playing with his best friend. But, one day, he is forced to leave home to avoid conscription into the army. He embarks on an epic journey, in which he encounters dangers and cruelties – and great acts of human kindness – as he bravely makes his way to a future he can only imagine.

Told in the powerful first person, this startling debut novel will encourage understanding and empathy in young readers, and allow the news headlines of the day to resonate with the humanity involved in creating them.

I always try to read as diversely as possible and recently I have been trying to widen my understanding of books about refugees. I want to be able to recommend books that help create empathy and to stock these books in my school library, as well as using them in class. I have heard lots of good things about this book and am hoping to read it soon!

A year after the death of her older brother, Prue Haywood’s family is still shattered by grief. But everything changes when a stranger arrives at the farm. A new, incredible technology has been discovered in the city of Medlock, where a secretive guild of inventors have developed a way to capture spirits of the dead in animal-like machines, bringing them back to life. Prue knows that the “Ghost Guild” might hold the key to bringing her brother back, so she seizes the stranger’s offer to join as an apprentice. But to find her brother, she needs to find a way to get the ghost machines to remember the people they used to be. Yet if Prue succeeds, all of society could come apart…

I am yet to read Brightstorm, this author’s debut, despite knowing that I will love it and buying a copy as soon as it came out! I really need to read both that and Wildspark because they both sound completely magical!

My Box-Shaped Heart by Rachael Lucas

Holly’s mum is a hoarder, and she is fed up with being picked on at school for being weird . . . and having the wrong clothes . . . and sticking out. All she wants is to be invisible. She loves swimming, because in the water everyone is the same.

Ed goes to the swimming pool to escape the horrible house he and his mum have been assigned by the women’s refuge. In his old life he had money; was on the swim team; knew who he was and what he wanted. In his old life his dad hit his mum.

Holly is swimming in one direction and Ed’s swimming in the other. As their worlds collide they find a window into each other’s lives – and learn how to meet in the middle.

I have heard a few people mention this one, but haven’t read anything by this author before. I spotted this on the ‘recently returned’ shelf and decided to give it a go!

The Umbrella Mouse by Anna Fargher

A timeless tale of courage, resistance and friendship, The Umbrella Mouse is a heart-stopping adventure drawing on the true stories of animals caught in the conflict of WWII.

1944, and London is under attack. Young mouse Pip Hanway’s safe and quiet world is turned upside down when her home, umbrella shop James Smith & Sons, is destroyed by a bomb. Orphaned and alone, she must begin a perilous quest to find a new home.

But the only way to get there is by joining Noah’s Ark, a secret gang of animals fighting the resistance in France, operating beneath the feet of the human soldiers. Danger is everywhere and as the enemy closes in, Pip must risk everything to save her new friends.

Beautifully illustrated by Sam Usher, Anna Fargher’s debut novel takes you on an incredible journey through a war that reaches even the smallest of creatures.

‘A spellbinding tale of bravery and hope, where courage is found in the smallest of heroes’ Gill Lewis, author of Sky Hawk

I always try to read all of the Waterstones books of the month, although the likelihood is that I would have picked this one up anyway as it sounds so brilliant!

Independence, Love and Being Different

Are there any you would recommend me moving straight to the top of the TBR list?

Do you ever buy books after having already read them? (I do, all the time!)