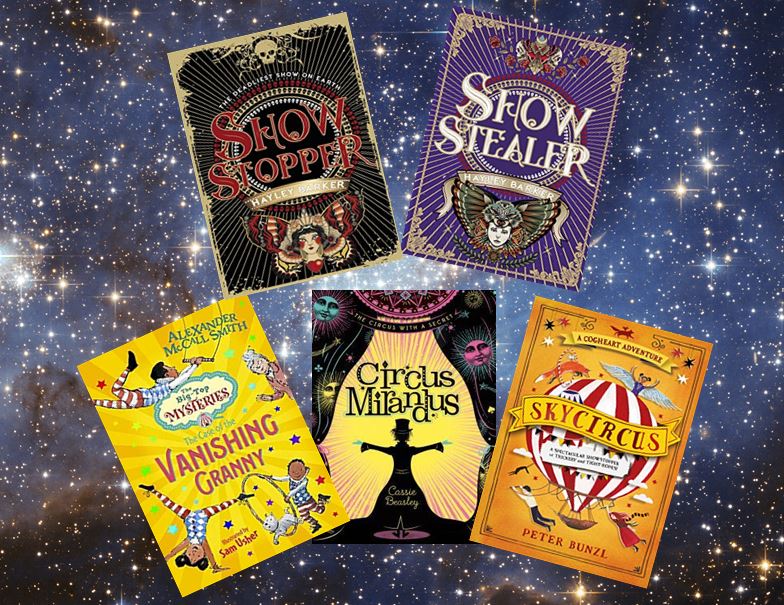 This time, the mini-reviews are all themed around circuses, which seems to be turning up more and more in children’s books. If there is a circus involved then I will almost certainly pick up the book to read!

Billy, Fern and Joe Shortbread are the stars of their family circus, but they also have another talent … for solving mysteries. So when a sad-looking boy from the audience reveals that his granny has disappeared, the siblings are determined to help. But this case won’t be easy to crack – it’s as if Tom’s granny has vanished into thin air!
With the help of their astonishing circus skills, will Billy, Fern and Joe be able to follow the clues and save the day?

This is a fun introduction to a new series, printed using Barrington Stoke’s dyslexia-friendly font and on tinted paper.
I wanted to read this as soon as I spotted it because it is set in a circus, following the travelling Shortbread family as they travel around the country performing their circus acts.
All three of the children have important roles in the circus and love their life, even if sometimes they long to try out what it would be like living in a ‘normal’ house. Billy, the oldest, is a trapeze artist, Fern is an acrobat and Joe, the youngest, trains his ten dogs to dance. Alongside performing and helping with all of the other ‘backstage’ jobs, they have lessons with Mr Birdcage, a former teacher-turned-clown in their classroom caravan.
They also have another, very important, strong to their bow – they solve mysteries. This story explains how they solve the mystery of a young boy’s missing grandmother and involves daring break-ins, chocolate and cake!
This book would be a great addition to any library catering for upper KS1 (Age 6) and Lower KS2 (7-9) and is sure to be a hit withe children who enjoy mysteries but need something with more humour than murder!

Check out my review of another great Barrington Stoke title – Houdini and The Five-Cent Circus!

Showstopper and Showstealer by Hayley Barker

Set in a near-future England where the poorest people in the land are forced to sell their children to a travelling circus – to perform at the mercy of hungry lions, sabotaged high wires and a demonic ringmaster. The ruling class visit the circus as an escape from their structured, high-achieving lives – pure entertainment with a bloodthirsty edge. Ben, the teenage son of a draconian government minister, visits the circus for the first time and falls instantly in love with Hoshiko, a young performer. They come from harshly different worlds – but must join together to escape the circus and put an end to its brutal sport.

I really enjoyed these, even though they can be chilling reads at times!

Show Stopper is set in a dystopian future England where only the Pure English are full citizens and everyone else is enslaved as the Dregs. It is told from two perspectives: Ben, the son of the Dreg Control Minister who has been raised to believe that Dregs are not fully human, yet who has begun to doubt this ‘truth’ and Hoshiko, a circus performer who was torn from her family at the age of five and now lives in cruel conditions, knowing that every performance could be her last. The two worlds collide when Ben’s family attends Cirque Dregs and , eager for a death to please the VIP visitors, the circusmaster almost sends Hoshiko to her death. Ben finds himself unable to stand back and watch, setting off a chain of events that has the potential to change their entire world.

This was a clever and chilling idea, inspired by the author’s fears about the growing animosity towards ethnic minorities and immigrants in the U.K. At times, parts of this vision are not fully explained or stretch credibility, but it was undoubtedly a gripping read. I would have liked to see some of the dark themes introduced more fully explored. This book is also a victim of insta-love, which I guess I have to forgive this once because of the plot. Finally, I spotted a repeated sentence and a few other small editing errors.

The stakes get even higher in this second (and final?) installment. All the characters grow and develop so much and I honestly had no idea how things were going to turn out! It kept me gripped and showed me a terrifying vision of what things could become when we start talking about ‘them’ and ‘us’.

Do you believe in magic?

Even though his awful Great-Aunt Gertrudis doesn’t approve, Micah believes in the stories his dying Grandpa Ephraim tells him of the magical Circus Mirandus: the invisible tiger guarding the gates, the beautiful flying birdwoman, and the magician more powerful than any other—the Man Who Bends Light. Finally, Grandpa Ephraim offers proof. The Circus is real. And the Lightbender owes Ephraim a miracle. With his friend Jenny Mendoza in tow, Micah sets out to find the Circus and the man he believes will save his grandfather.

The only problem is, the Lightbender doesn’t want to keep his promise. And now it’s up to Micah to get the miracle he came for.

Magical adventure into a circus that exists only if you believe in it, fitting itself into the gaps in reality.
The story starts when Micah’s strict Aunt Gertrude turns up to look after him and his grandfather, as Ephraim Tuttle’s health seems to be on the decline. Ephraim has always told his grandson stories about a magical circus which he visited as a child, but he now tells Micah that the stories are true and he is calling in his favour of a miracle from The Man Who Bends Light.
This was a fast-paced, charming adventure with plenty of magic, although I wanted more explanation about how everything worked and felt that there was a missed opportunity for Micah exploring more of the circus!

When a travelling skycircus arrives in Brackenbridge, Lily and Robert can’t wait to step aboard… But there’s something sinister about the hybrid children who appear as part of the act. And before Lily and Robert can do anything, they’re captured by shadowy figures and whisked off in the mysterious flying circus to somewhere far, far away…

I was really excited to go back into the world introduced in Cogheart and developed in Moonlocket. Lots more of my favourite snarky mech-fox Malkin, as well as introducing some new characters in the Skycircus, including acrobats and other hybrids.
Lily has grown up a little in this book, although she is still recognizably the impetuous, Penny Dreadful-loving girl we met in the first book. In Moonlocket, as the focus was on Robert, I feel like she took a bit of a back seat so it was nice to see her getting a bit more time, even though I wished there was more time spent on her relationship with her father.
I enjoyed meeting the other hybrids, but learning about them raised SO many questions that I found myself a little unsatisfied with the neat ending, particularly as it had the feeling of a ‘last book’. I liked this entire series, but I really hope there’s more!

This is just a small selection of books featuring circuses as it turns out that I have read rather a lot of them! I feel like this post will have to have a part two soon!

Could you recommend any other books featuring circuses?

Check out some more mini-reviews themed around Girls in Politics, the Sea , Mermaids , Rescue Dogs or Clockwork.