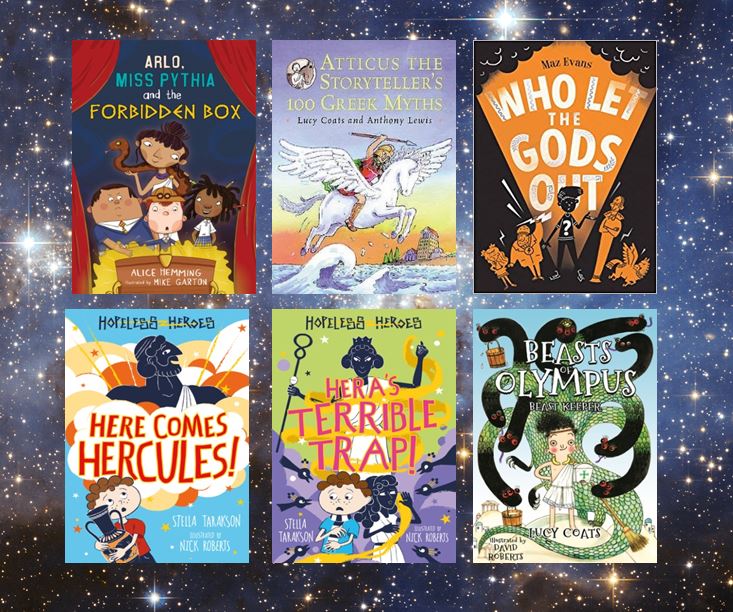 This time, the mini-reviews are all themed around Greek mythology, re-imagined for children. We study Ancient Greece in Year 3, so these are all books that I have used in Year 3 or with other year groups.

Arlo, Miss Pythia and the Forbidden Box by Alice Hemming and Mike Garton

“‘So what? She shares her name with some Ancient Greek priestess,’ said Daisy-May. ‘My surname is Bacon and I’m a vegetarian. It means nothing.’”

5P are back with a completely new teacher: Miss Pythia. Though she’s no Mrs Ogg, her strange prophetic visions and mysterious box are definitely not normal. Arlo is sure something else is going on and, when 5P are picked to take part in ‘Play in a Day’, they might finally find out just what exactly is in that box.

This is the second book in the Class X series. With another year comes another new teacher, and just like before, there is something mysterious going on. It’s up to Arlo to keep his class safe and unravel the mystery!

This is a really fun look at the myth of Pandora’s box, with a great cast of characters. I loved Arlo and his friends in the class, particularly how they were each able to cater to their strengths when producing the one-day-play. Arlo’s habit of taking notes is quite endearing, especially when he makes the connection between Miss Pythia’s strange rhyming moments and the fact that her predictions always seem to be correct.

I read part of this to my class, then watched the book being snapped up from our Book Corner and eagerly passed along. The illustrations also work really well in tandem with the text – perfect both for children already familiar with the myth of Pandora’s box and as a way to encourage an interest in learning more about Greek mythology.

I am also looking forward to more of 5P’s adventures as they move into Year 6 – will they ever have a normal teacher at their primary school?!

Atticus the Storyteller is determined to take part in the great Storytelling Festival near Troy. He leaves his family in Crete and sets off on a year-long journey round Greece with his donkey, Melissa; and wherever he goes he tells his favourite myths to anyone who’ll listen.
The 100 myths include all the favourites, such as the wanderings of Odysseus, the labours of Heracles, the stories of King Midas, Daedalus and Icarus, and Theseus and the Minotaur. Atticus’s journey takes the reader to all the sites of the myths and gives a captivating glimpse of how life was lived in Ancient Greece.
This is an unparalleled introduction to the Greek myths for younger children, excitingly told, wonderful to read aloud, and illustrated on every opening with lively, engaging, colourful pictures full of authentic detail. In Orion’s tradition of extra-large great-value story books, this is an outstandingly good resource for every family.

I read this with my class every year during our topic on Ancient Greece. It is written in a really clear format, with the stories being short enough to squeeze in throughout the school day – we usually aim to read between 3 and 5 a day to get through all 100 in half of the Spring Term. It includes a great mix of the more popular myths and some lesser-known ones, as well as including lots which have links to our everyday culture and language e.g. the story of Atlas, etc. The class always joins in with groans when Zeus falls in love *yet again*!

Who Let the Gods Out? by Maz Evans

Elliot’s mum is ill and his home is under threat, but a shooting star crashes to earth and changes his life forever. The star is Virgo – a young Zodiac goddess on a mission. But the pair accidentally release Thanatos, a wicked death daemon imprisoned beneath Stonehenge, and must then turn to the old Olympian gods for help. After centuries of cushy retirement on earth, are Zeus and his crew up to the task of saving the world – and solving Elliot’s problems too?

This book has been a hit with any group I have read it too, although, because of some of the issues raised, I would recommend it for Year 5 upwards. Elliot is a great main character, who maintains his smart attitude even when things in his life get difficult. The Greek Gods are bubbling over with personality and, overall, this is a great start to a series which I have heard gets even better.

When Tim Baker breaks his mum’s favourite vase, it’s the least of his problems. The Greek hero he’s released is in danger of doing far worse. To the flowers, the rug—Oh, no! Not the kitchen!

Hercules is only trying to be helpful but he’s just hopeless. It’s time to send this dim demigod home before Tim becomes ancient history.

Oh the chaos caused by Greek Gods being released into the modern world – this has a  similar premise to Who Let the Gods Out? but the idea is executed in a very different way. Tim releases Hercules and finds out just how much havoc a Greek hero can cause – see my full review here.

Tim Baker thinks his adventures are over until he hitches a ride to Ancient Greece on a stolen vase. Soon Tim finds himself trapped with an army of peacocks and a hero who can’t stop admiring himself.
Put that mirror down, Theseus!

Thank the gods his new friend Zoe is there to help. Just don’t tell her dad…

This is the second in what looks like it will be a trilogy, although I have yet to get my hands on the third book. I loved how this gently poked fun at the hero Theseus, particularly as Theseus and the Minotaur was our class myth this year so we spent a lot of time thinking about the characters. If you enjoyed the first book, you will enjoy this too – I know that it has been doing the rounds in my classroom this year so I’ve bought another copy for next year!

What begins as just another ordinary day for Demon ends up being far from normal . . . because travelling on a rainbow to Mount Olympus is a bit odd for anyone, even if your dad is the Greek god Pan! When he arrives, Demon is in for a shock. The stables are full of mythical beasts like the flatulent Cattle of the Sun and a very grumpy Griffin. All Demon’s animal husbandry skills, polished on his mother’s farm on Earth, are going to be put to a rather exacting test as he tries to sort out the chaos and deal with the upset and concern of the gods. Can the stableboy help the Nemean lion that Heracles has hurt, and avoid incurring Hera’s wrath if he can’t heal her pet Hydra . . .

The first in a delightful action-packed four-book series, acclaimed writer Lucy Coats uses her original and funny voice to bring to life the gods, goddesses and mythical beasts of the ancient Greek pantheon.

This would be perfect for ages 7-9, especially anyone studying Ancient Greece. I really like how this gives the other side of the story with the mystical beasts arriving back in Olympus to recover after being ‘killed’ by Greek heroes in the world below. My class loved how this flipped things around, with the heroes becoming the bad guys as the poor creatures compare battle wounds e.g. the Nymerian tiger regrowing his skin or the Hydra re-attaching all his heads, etc.

Could you recommend any other books featuring Greek mythology?

Check out some more mini-reviews themed around Girls in Politics, the Sea , Mermaids , Rescue Dogs , Clockwork , Circuses or Female Pilots.