Back with more books from the bookshelf – continuing with the next 4 yellow books on my shelves. (See Red, Orange and Yellow Part 1 and 2) 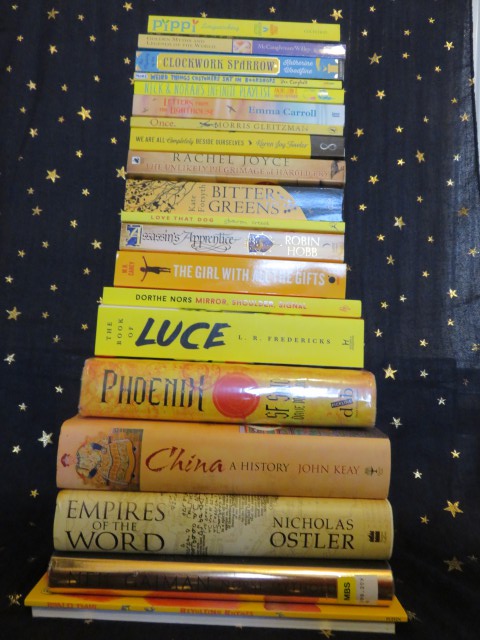 Love that Dog by Sharon Creech

Jack hates poetry. Only girls write it and every time he tries to, his brain feels empty. But his teacher, Ms. Stretchberry, won’t stop giving her class poetry assignments — and Jack can’t avoid them. But then something amazing happens. The more he writes, the more he learns he does have something to say.

Love, love, love this book – this is an all-time favourite. The books is written in an exchange of poetry between a young boy and his teacher who is trying to persuade him to read and write poetry. At first he thinks it is stupid, then things begin to change…

This is a really quick read but packs an emotional punch – read it now if you haven’t already!

In a faraway land where members of the royal family are named for the virtues they embody, one young boy will become a walking enigma.

Born on the wrong side of the sheets, Fitz, son of Chivalry Farseer, is a royal bastard, cast out into the world, friendless and lonely. Only his magical link with animals – the old art known as the Wit – gives him solace and companionship. But the Wit, if used too often, is a perilous magic, and one abhorred by the nobility.

So when Fitz is finally adopted into the royal household, he must give up his old ways and embrace a new life of weaponry, scribing, courtly manners; and how to kill a man secretly, as he trains to become a royal assassin.

This is actually my boyfriend’s copy of this book – he bought it in our local bookshop after hearing it recommended online. I was quite please to see it as I originally read this trilogy years ago and loved it! It is a classic fantasy novel which still stands up well – there have also been several other trilogies written in this world so I think I might reread this before moving on to other books by Robin Hobb. We now have two copies of this entire trilogy… 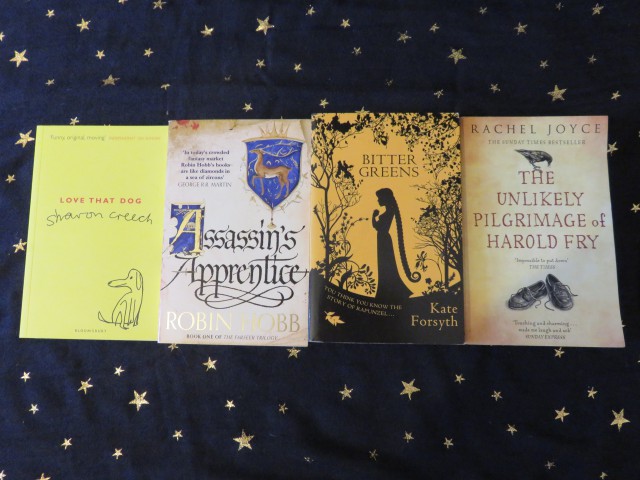 You think you know the story of Rapunzel…

Charlotte-Rose de la Force, exiled from the court of the Sun King Louis XIV, has always been a great teller of tales.

Selena Leonelli, once the exquisite muse of the great Venetian artist Titian, is terrified of time.

Margherita, trapped in a doorless tower and burdened by tangles of her red-gold hair, must find a way to escape.

Three women, three lives, three stories, braided together in a compelling tale of desire, obsession and the redemptive power of love.

I had been looking out for this after seeing it mentioned in a list of fairytale retellings on which I had read and enjoyed almost everything else on the list.  was very happy to see it in my local secondhand bookshop recently – hoping to read this soon!

The Unlikely Pilgrimage of Harold Fry by Rachel Joyce

Recently retired, sweet, emotionally numb Harold Fry is jolted out of his passivity by a letter from Queenie Hennessy, an old friend, who he hasn’t heard from in twenty years. She has written to say she is in hospice and wanted to say goodbye. Leaving his tense, bitter wife Maureen to her chores, Harold intends a quick walk to the corner mailbox to post his reply but instead, inspired by a chance encounter, he becomes convinced he must deliver his message in person to Queenie—who is 600 miles away—because as long as he keeps walking, Harold believes that Queenie will not die.

So without hiking boots, rain gear, map or cell phone, one of the most endearing characters in current fiction begins his unlikely pilgrimage across the English countryside. Along the way, strangers stir up memories—flashbacks, often painful, from when his marriage was filled with promise and then not, of his inadequacy as a father, and of his shortcomings as a husband.

Ironically, his wife Maureen, shocked by her husband’s sudden absence, begins to long for his presence. Is it possible for Harold and Maureen to bridge the distance between them? And will Queenie be alive to see Harold arrive at her door?

I picked this up while volunteering in my local Oxfam Books though I still haven’t read it. It still sounds really interesting to me so I am hoping to get to it soon!

What did you think?

Which yellow books do you have on your shelves?

Don’t go yet – stick around to read some book reviews?

Check out a life-affirming tale of seizing the day, Sunflowers in February.

Learn about the benefits of being bilingual.

Start a new language by learning the Top 25 phrases in German or parts of the body in multiple languages.