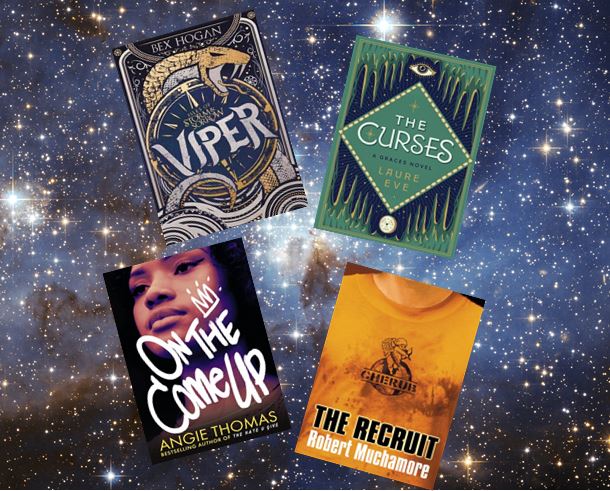 Marianne has been training to be the Viper for her entire life – to serve and protect the King and the citizens of The Twelve Isles – but to become the Viper and protect the islands she loves she must find the strength to defeat her father. A new fantasy trilogy perfect for fans of Sarah J Maas.

He will make me a killer.
Or he will have me killed.
That is my destiny.

Seventeen-year-old Marianne is fated to one day become the Viper, defender of the Twelve Isles.

But the reigning Viper stands in her way. Corrupt and merciless, he prowls the seas in his warship, killing with impunity, leaving only pain and suffering in his wake.

He’s the most dangerous man on the ocean . . . and he is Marianne’s father.

She was born to protect the islands. But can she fight for them if it means losing her family, her home, the boy she loves – and perhaps even her life?

A brave heroine. An impossible dilemma. An epic new fantasy trilogy set on the high seas.

The Curses by Laure Eve

Picking up the pieces after the chilling events of the previous year isn’t easy, but the Graces are determined to do it. Wolf is back after a mysterious disappearance, and everyone’s eager to return to normal. Except for Summer, the youngest Grace. Summer has a knack for discovering the truth—and something is troubling her. After a trail of clues leads her to what could be the key to both her family’s mysterious past and the secret of Wolf, she’s determined to vanquish yet another curse. But exposing secrets is a dangerous game, and it’s not one Summer can win alone.

At Summer’s behest, the coven comes back together, reluctantly drawing their erstwhile friend River back into the fold. But Wolf’s behavior becomes unpredictable even as Fenrin’s strength fades, and Summer must ask herself whether the friend she so loves is also planning her family’s ultimate, cursed demise.

This riveting sequel to The Graces is saturated with magic, the destructive cost of power, the complications of family, and the nature of forgiveness.

I loved the first book, The Graces, so have to rad this to find out what is going to happen!

On the Come Up by Angie Thomas

Sixteen-year-old Bri wants to be one of the greatest rappers of all time. Or at least make it out of her neighborhood one day. As the daughter of an underground rap legend who died before he hit big, Bri’s got big shoes to fill. But now that her mom has unexpectedly lost her job, food banks and shutoff notices are as much a part of Bri’s life as beats and rhymes. With bills piling up and homelessness staring her family down, Bri no longer just wants to make it—she has to make it.

On the Come Up is Angie Thomas’s homage to hip-hop, the art that sparked her passion for storytelling and continues to inspire her to this day. It is the story of fighting for your dreams, even as the odds are stacked against you; of the struggle to become who you are and not who everyone expects you to be; and of the desperate realities of poor and working-class black families.

This is one that I have been meaning to pick up for a while, after reading The Hate U Give, which is brilliant in so many ways. I am always interested to see representation of poor or working-class protagonists as it is something that I don’t feel is common enough in middle-grade and YA fiction.

The Recruit (Cherub #1) by Robert Muchamore

The first title in the number one bestselling CHERUB series! James hits rock bottom before he’s offered a new start in an intriguing organisation … A terrorist doesn’t let strangers in her flat because they might be undercover police or intelligence agents, but her children bring their mates home and they run all over the place. The terrorist doesn’t know that one of these kids has bugged every room in her house, made copies of all her computer files and stolen her address book. The kid works for CHERUB. CHERUB agents are aged between ten and seventeen. They live in the real world, slipping under adult radar and getting information that sends criminals and terrorists to jail. For official purposes, these children do not exist.

Praise for the CHERUB series:

‘Pacy writing, punchy dialogue and a gripping plot, it’s got it all’ – Daily Express

Based on the cover and the description, I probably wouldn’t have initially picked this up. Yet, after being lucky enough to meet the author a few weeks ago and hear lots of people talking about this series, I’ve decided to give it a go!