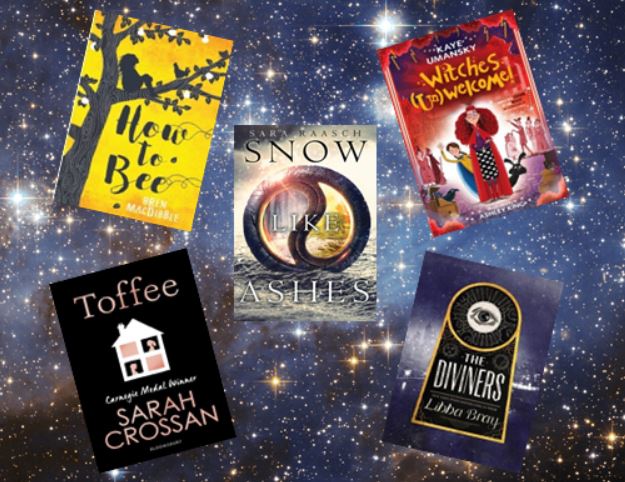 How to Bee by Bren MacDibble

Peony lives with her sister and grandfather on a fruit farm outside the city. In a world where real bees are extinct, the quickest, bravest kids climb the fruit trees and pollinate the flowers by hand.
Will Peony’s grit and quick thinking be enough to keep her safe?
A story about family, loyalty, kindness and bravery, set against an all-too possible future where climate change has forever changed the way we live.

This just sounds like such an interesting read and it has won a tonne of awards too so there must be something great about it! In the summer term my class study plants and talk about pollination – I might read this to them to spark a discussion!

A heartbroken girl. A fierce warrior. A hero in the making.

Sixteen years ago the Kingdom of Winter was conquered and its citizens enslaved, leaving them without magic or a monarch. Now, the Winterians’ only hope for freedom is the eight survivors who managed to escape, and who have been waiting for the opportunity to steal back Winter’s magic and rebuild the kingdom ever since.

Orphaned as an infant during Winter’s defeat, Meira has lived her whole life as a refugee, raised by the Winterians’ general, Sir. Training to be a warrior—and desperately in love with her best friend, and future king, Mather — she would do anything to help her kingdom rise to power again.

So when scouts discover the location of the ancient locket that can restore Winter’s magic, Meira decides to go after it herself. Finally, she’s scaling towers, fighting enemy soldiers, just as she’s always dreamed she would. But the mission doesn’t go as planned, and Meira soon finds herself thrust into a world of evil magic and dangerous politics – and ultimately comes to realize that her destiny is not, never has been, her own.

I love fantasy books and this sounds brilliant – hope I enjoy it!

It’s summertime in Smallbridge, but, as always, nothing exciting is happening. Smallbridge doesn’t do excitement. They do gossip, though. And now Elsie Pickles is the subject of the gossip as rumours spring up about her new magic skills …

Things aren’t helped when Magenta Sharp, bored of running her mail-order service, Spells on Tap, opens up a pop-up magic shop next to Pickles’ Emporium. Soon the town is overrun with witches, much to the annoyance of the magic-hating people of Smallbridge! But maybe a little bit of magic is just the thing Smallbridge needs?

I adore this series (see my review of the first book here). I believe that this is the third of four planned books and I am really excited to go back into Elsie Pickles’ world!

I am not who I say I am,
and Marla isn’t who she thinks she is.

I am a girl trying to forget.
She is a woman trying to remember.

Allison has run away from home and with nowhere to live finds herself hiding out in the shed of what she thinks is an abandoned house. But the house isn’t empty. An elderly woman named Marla, with dementia, lives there – and she mistakes Allison for an old friend from her past called Toffee.

Allison is used to hiding who she really is, and trying to be what other people want her to be. And so, Toffee is who she becomes. After all, it means she has a place to stay. There are worse places she could be.

But as their bond grows, and Allison discovers how much Marla needs a real friend, she begins to ask herself – where is home? What is a family? And most importantly, who am I, really?

Sarah Crossan is an auto-buy author for me as I love absolutely everything that she has written. I know that I will buy my own copy of this sooner or later, but I couldn’t resist snatching up a copy when I spotted it on the ‘New Arrivals’ Shelf. I have a very soft spot for old people so I just know that this book is going to destroy me!

The Diviners by Libba Bray

Do you believe there are ghosts and demons and Diviners among us?

Evie O’Neill has been exiled from her boring old hometown and shipped off to the bustling streets of New York City–and she is pos-i-tute-ly ecstatic. It’s 1926, and New York is filled with speakeasies, Ziegfield girls, and rakish pickpockets. The only catch is that she has to live with her Uncle Will and his unhealthy obsession with the occult.

Evie worries he’ll discover her darkest secret: a supernatural power that has only brought her trouble so far. But when the police find a murdered girl branded with a cryptic symbol Will is called to the scene, Evie realizes her gift could help catch a serial killer.

As Evie jumps headlong into a dance with a murderer, other stories unfold in the city that never sleeps. A young man named Memphis is caught between two worlds. A chorus girl named Theta is running from her past. A student named Jericho hides a shocking secret. And unknown to all, something dark and evil has awakened….

Printz Award-winning and New York Times bestselling author Libba Bray opens a brand-new historical series with The Diviners, where the glittering surface of the Roaring Twenties hides a mystical horror creeping across the country.

This is a book that I keep seeing around, but have never picked up until today! I like the sound of some things in the summary, but I am unsure whether or not I will enjoy this!