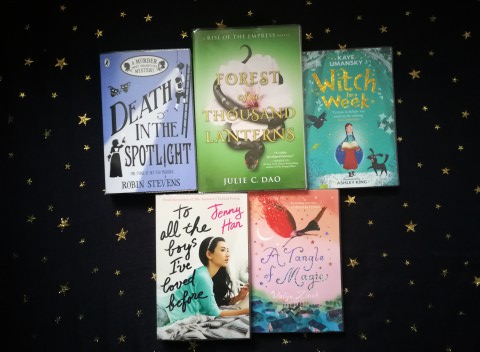 I haven’t posted a library loot since November as life has been so busy, despite the fact that I have been getting tonnes of great books from my library.

I go there every Saturday and max my card out (and my partner’s…) pretty much every week. I’m going to re-schedule my library loot posts fro Saturdays to Mondays, because I tend to take the day off social media on a Saturday so picking up the books in the morning and photographing and writing a post straightaway often just didn’t happen because we already had offline plans. If I post on a Monday, I have time on Sunday to sort out my books and the post! Until I get caught up I’m going to post my loot from the week before.

So, here’s my library loot:

Death in the Spotlight by Robin Stevens

Someone will take their final bow . . .

Fresh from their adventure in Hong Kong, Hazel Wong and Daisy Wells are off to the Rue Theatre in London to face an entirely new challenge: acting.

But the Detective Society is never far away from danger, and it’s clear there’s trouble afoot at the Rue.

Jealousy, threats and horrible pranks quickly spiral out of control – and then a body is found.

Now Hazel and Daisy must take centre stage and solve the crime . . . before the murderer strikes again.

This is the seventh in the Murder Most Unladylike series, which I would probably never have picked up if not for a recommendation from my friend, Amy @GoldenBooksGirl. I love them so devoured this on the same day I borrowed it! Whoops! Now I have to wait until Book 8 is out…

Forest of a Thousand Lanterns by Julie C. Dao

Eighteen-year-old Xifeng is beautiful. The stars say she is destined for greatness, that she is meant to be Empress of Feng Lu. But only if she embraces the darkness within her. Growing up as a peasant in a forgotten village on the edge of the map, Xifeng longs to fulfill the destiny promised to her by her cruel aunt, the witch Guma, who has read the cards and seen glimmers of Xifeng’s majestic future. But is the price of the throne too high?

Because in order to achieve greatness, she must spurn the young man who loves her and exploit the callous magic that runs through her veins–sorcery fueled by eating the hearts of the recently killed. For the god who has sent her on this journey will not be satisfied until his power is absolute.

I requested that my library buy a copy of this because I have been wanting to read it so much – often I do this, then buy my own copy if I’ve enjoyed it! I am really excited to get stuck into this because it sounds like I will love it – a fantasy inspired by fairytales and East Asia – sign me up!

Witch for a Week by Kaye Umansky

When Elsie Pickles offers to house-sit the mysterious home of local witch Magenta Sharp, she has no idea what she’s getting herself into. Left with a talking raven and a scruffy dog for company, a magical tower that has a mind of its own and a book of instruction called Everything You Need to Know, what could possibly go wrong?

With an assortment of weird and wonderful neighbours banging at the door and a box of volatile magical ingredients that must be used immediately, Elsie finds out that looking after Magenta’s home might not be as easy as she first thought … does she have what it takes to be a witch for a week or will it all end in a magical disaster?

I practically inhaled this on the way home from the library, so excited was I to read it. I love books about witches and this was no disappointment. I hope it will be the first in a series!

To All the Boys I’ve Loved Before by Jenny Han

To All the Boys I’ve Loved Before is the story of Lara Jean, who has never openly admitted her crushes, but instead wrote each boy a letter about how she felt, sealed it, and hid it in a box under her bed. But one day Lara Jean discovers that somehow her secret box of letters has been mailed, causing all her crushes from her past to confront her about the letters: her first kiss, the boy from summer camp, even her sister’s ex-boyfriend, Josh. As she learns to deal with her past loves face to face, Lara Jean discovers that something good may come out of these letters after all.

This probably needs no introduction! I’ve had an e-book version of this for years but have never read it. Finally I decided to just pick up a paper copy because I thought that I would be much more likely to read it if it’s sitting there looking at me. I wanted to read this before watching the Netflix movie – so did both in a day! I enjoyed this even more than I thought I would so will pick up Book 2 next I think!

A Tangle of Magic by Valija Zinck

Penelope lives with her mother – her father died years ago. She has always been different from other children: for example, her hair has been grey since she was born. But one day, Penelope wakes up with sparkling red hair and her mother confesses the truth: her father is not only still alive, he’s a wizard. Penelope has inherited his powers, and embarks on a journey to find him.

This just sounds like completely my cup of tea – I love fantasy and magic! Might read this next…